I Should Call Them My Debt Monkeys

Knit with the last of my non-sock club STR, these were completed shortly after I became a homeowner and acquired a massive amount of debt. 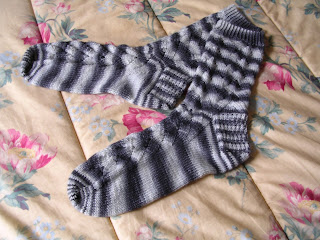 Pattern: Monkey by Cookie A. (winter '06 Knitty)
Yarn: Blue Moon Fiber Arts Socks That Rock lightweight (100% superwash merino), colorway Stormy Weather, one skein
Needles: two 12" US 1 (2.5 mm) Addi Turbo circs
Started/Completed: June 5/June 15
Mods: my usual -- no purls and a slip-stitch heel flap -- and an accidental oopsie in the placement of the gusset decrease stitches that resulted from not having the pattern in front of me

I bought this yarn with a BMFA gift certificate that came as part of my final package from my Sockret Pal spoiler, Becky. I originally intended it for a pair of socks for The Mister, but I soon realized that the pooling would be way too busy for his taste, even if the colorway was squarely in his usual range of preferences.

Speaking of pooling, I'm quite pleased with how well the striping/spiraling worked out on these socks. They make me think of the old black-and-white jail uniforms, hence the moniker "Jailbird Monkeys" on my Ravelry projects page.

In a moment of almost-guilt for using yarn that was intended for The Mister, I cast on a pair of plain socks for him as soon as these were done. They're black and gray and extremely boring, but at least they'll knit up quickly.

* * * * *
Thank you all for your congratulations on the new house! I promise I will post some pictures eventually, once we're all moved and settled in. We've having a bunch of work done this week (new electrical service, some plumbing, new carpet, etc.), and the furniture and boxes arrive on Friday, so I'm hoping that by the end of the weekend we'll be reasonably unpacked and back to normal.

Finally, a reminder -- tomorrow is the third Wednesday of the month, so the Hurricane Knitters will be meeting starting at about 7 p.m. at the Waterworks Barnes & Noble. We'd love to see some new faces, so stop by if you can make it!
Posted by Sarah at 5:29 PM