First of all, it's Sunday, which means spinning. Very little has gone on this week, given that it was a Hurricane Knitting week, the end of the hockey playoffs, and insanely hot.

I did clear the rest of the March Hare singles off the bobbin to free it up by Navajo plying it into a miniskein. It's not very much and my technique was a little sloppy, so I haven't even bothered to finish it yet and may not finish it at all. I just like looking at it as a pretty skein. 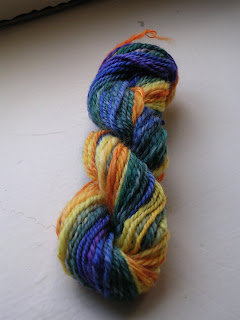 The only new spinning I managed to do all week was to spin singles from the first half of my other Dyeing Arts roving. This was the 2 oz. of pinks and reds; the other 2 oz. is greens and purples. 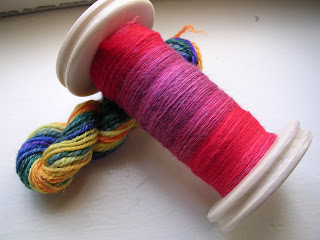 And that's all for the spinning content this week!

Yesterday I finally made it over to Natural Stitches to enter the sock contest and had the delightful surprise of meeting Lisa and Anna for the first time in person. They had both just cast on for the February Lady Sweater and were showing off the pattern, and the next thing I knew, I was winding the four skeins of Dream in Color Classy I'd just bought in a cheerful colorway called Go Go Grassy. As you can see, I've already printed out the pattern and swatched, so I'm ready to cast on tonight. 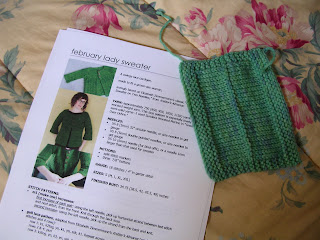 And you can't say I'm crazy for starting a wool sweater in the middle of June (when it's about 90 degrees outside), because Lisa and Anna are doing it, too! With any luck, you may see us in an upcoming Natural Stitches newsletter, modeling our fab new sweaters!

I know what you may be thinking -- why am I starting a sweater when I've been working so hard to finish Icarus? Well, let's face it: There is no way Icarus is going to be done in time for the start of the mystery shawl KAL next Saturday, and I think I'd start to resent the darn thing if I was avoiding starting my exciting new project because of it. I think I've just accepted the fact that Icarus is meant to be a long-term project that will get done, eventually. If I can make it before it turns into a year-old WIP, so much the better.
Posted by Sarah at 5:49 PM