The Very Best Kind of Socks

While I'm busy spinning everything in sight, I do have a related FO to share with you. These were finished last Thursday, finally, after being in progress since late April. I think they're very appropriate for this time of year considering that they're handspun! 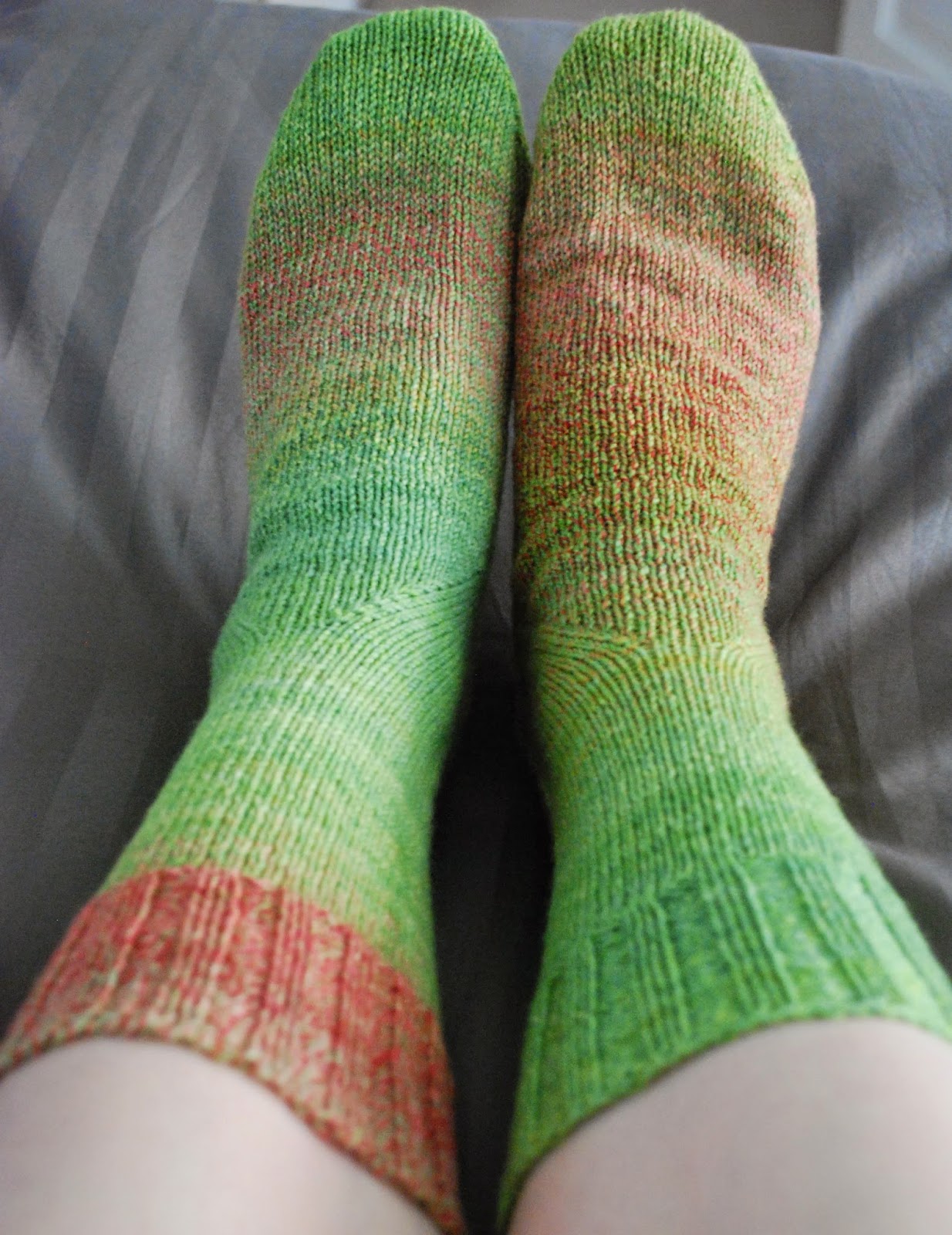 You may recall that I spun up the yarn (from CosySpins Falkland that I bought locally in November) in the middle of the winter when I was really craving something springlike. I decided to knit it up into a basic pair of socks, but with a twist. 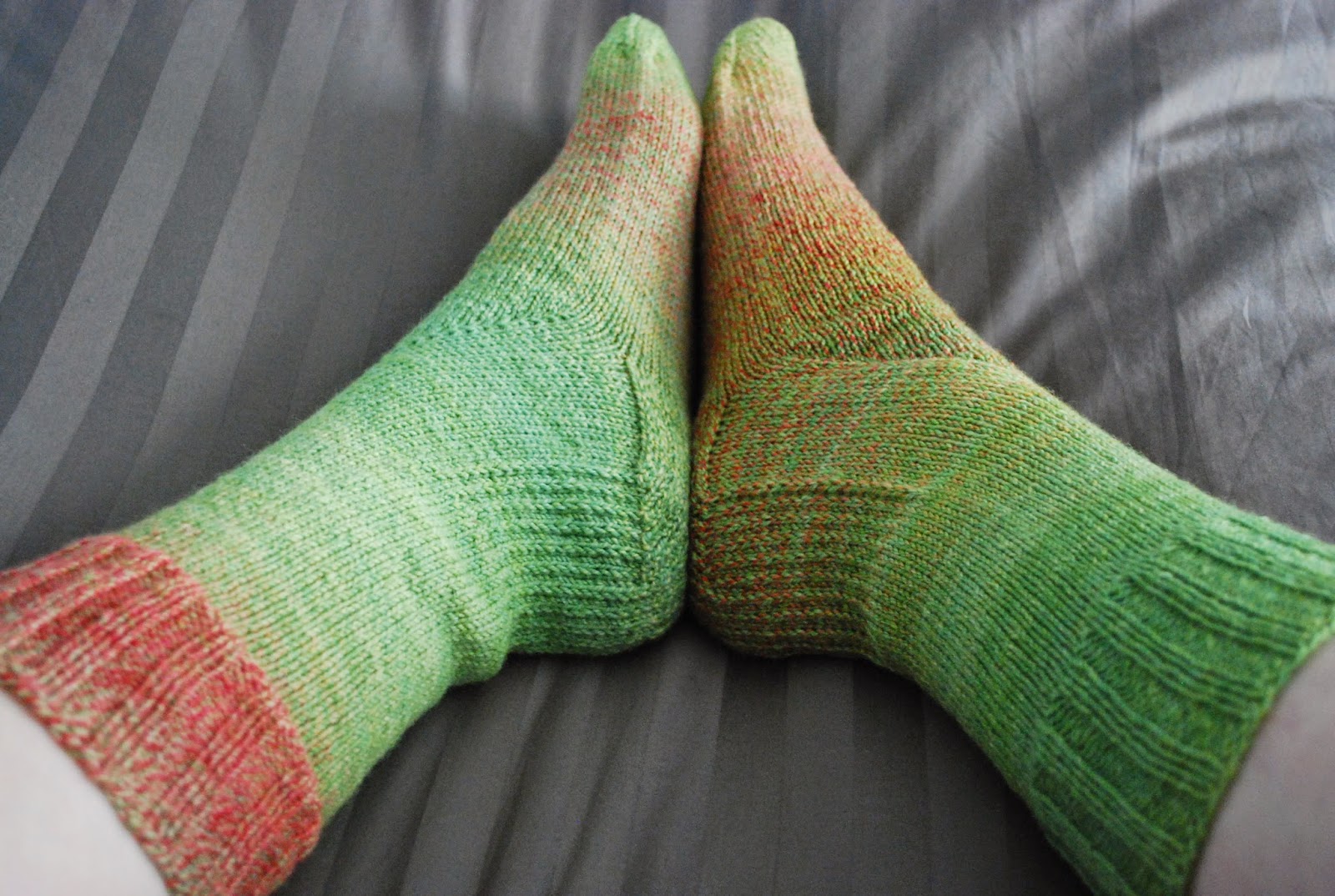 Lately I've been interested in doing simultaneous heel flaps and gusset increases for handspun socks, in part because after the heel is turned, you work what is essentially another flap under the heel to decrease away the extra stitches. I've usually maintained the slip-stitch pattern that's used in the heel flap in this section for added durability. The twist this time around was that instead of putting in the increases on either side of the instep stitches, I put them in the middle of the instep. The result is that Y shape on the foot, and they actually fit pretty well because that section kind of hugs the foot. 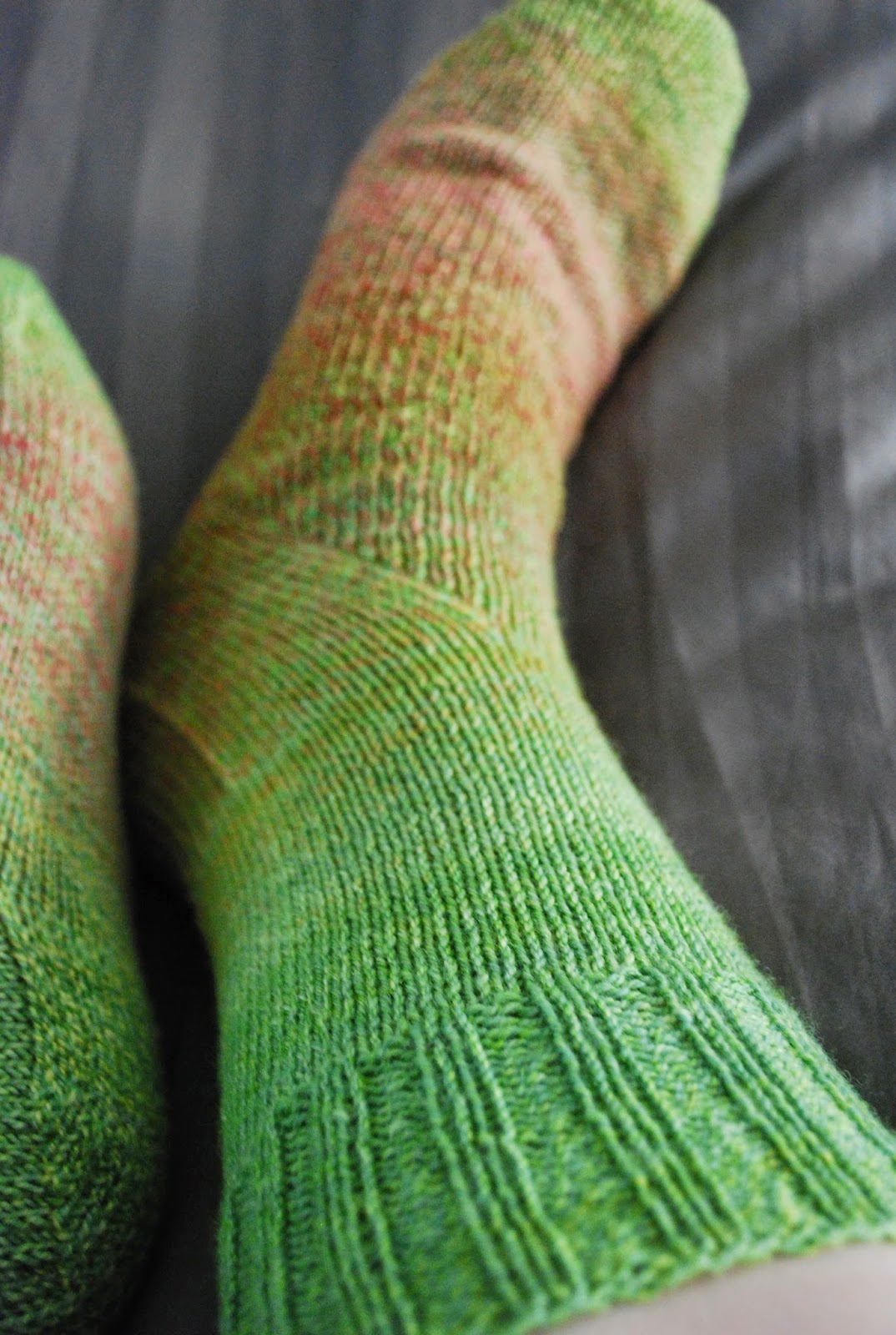 My favorite part about knitting handspun socks is that you never quite know what will happen with the colors. As luck would have it, the reddish section at the beginning of the first sock aligned almost exactly with the length of the ribbing -- that was totally unintentional! 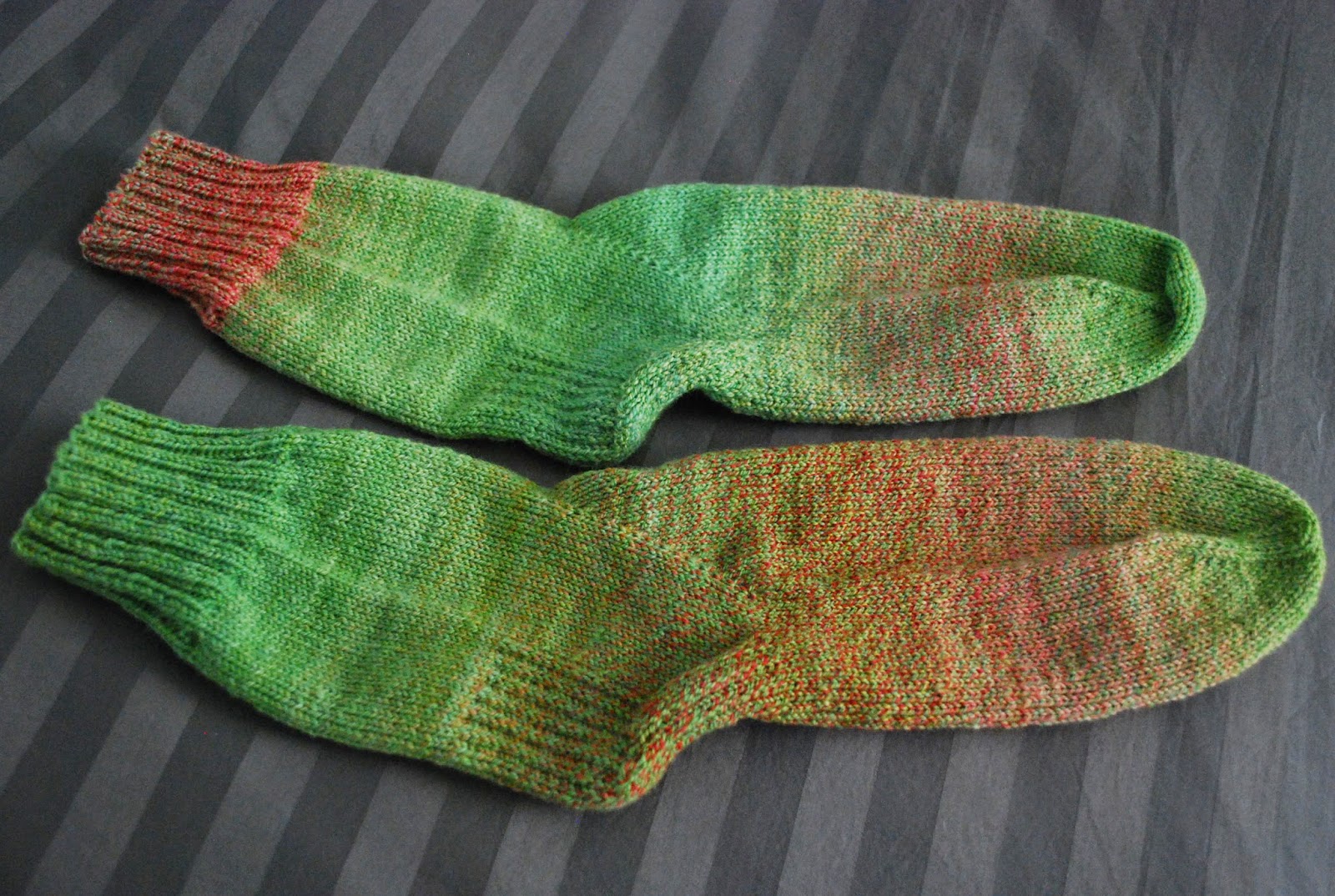 These socks will likely get a lot of wear next winter. This was my first time using Falkland for sock yarn, and it resulted in a nice, squishy fabric that should be fairly durable as long as I'm not too hard on them.

Meanwhile, I finished my first skein for the Tour de Fleece. This is Fat Cat Knits Polwarth in Mon Ami that was dyed as a gradient. I split it for a fractal spin (split in half lengthwise and then split one half in half again); that means one ply goes through the color sequence once and the other ply goes through the sequence twice. 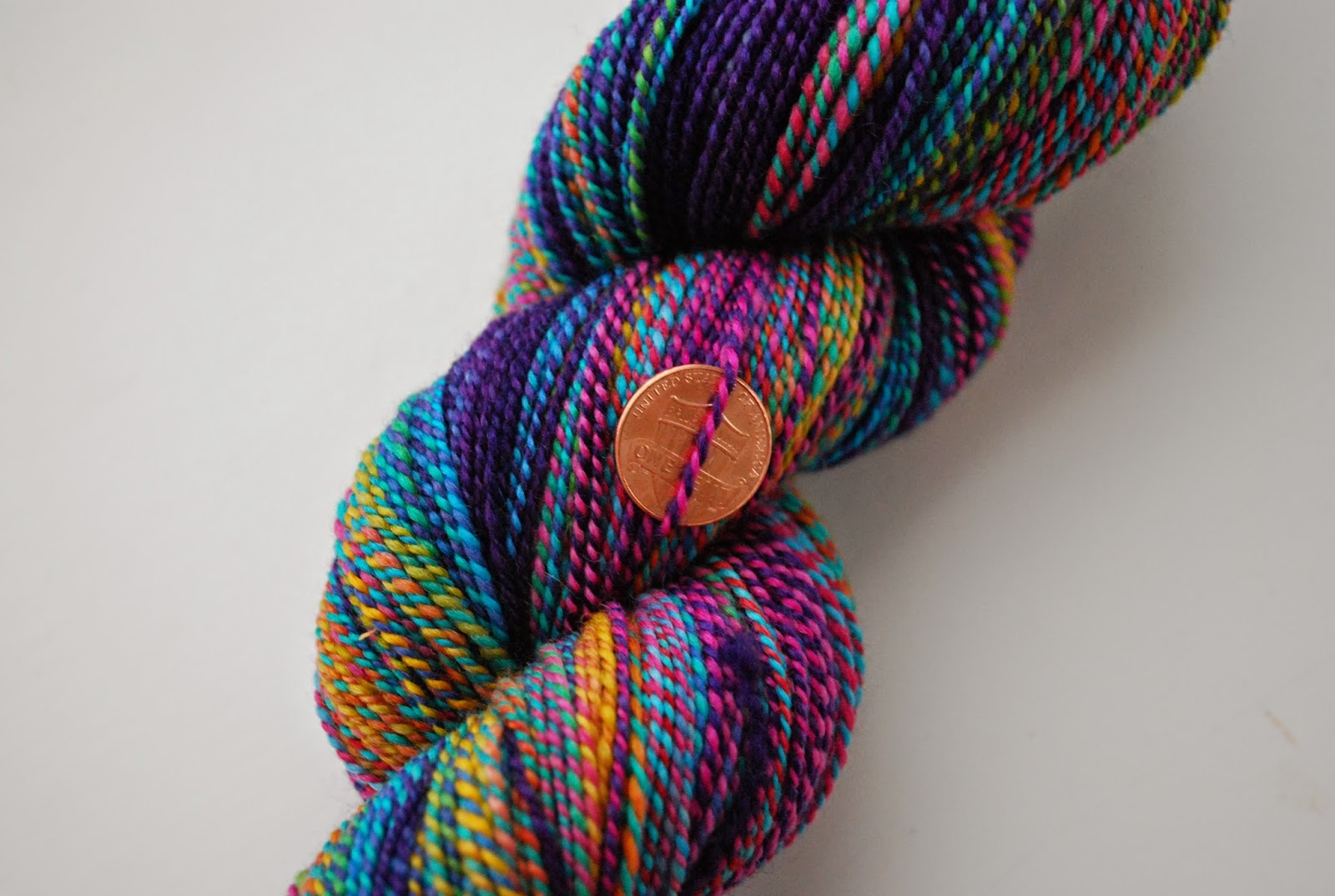