How have you spent your Memorial Day weekend? I've spent mine plying.

I'd been saving up singles for the start of Stash Dash, so when the event finally kicked off on Friday, I was ready. I was able to leave work early on Friday, so I got a bit of time to start in on the first bobbin before dinner. Twenty-four hours later, I had two finished skeins soaking in the tub. By this morning, they were dry. 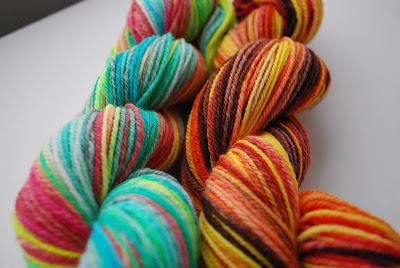 These two skeins were spun from the first two colorways in the FatCatKnits Under the Sea installment of the fiber club. My fiber was Targhee, and the two colorways were Sea Anemone (left) and Cinnamon Clownfish (right). I decided to keep the colors separate for this round, so I split each length of top vertically and chain plied to make self-striping skeins. My grist was fairly accurate; I ended up with 219.5 yards for the skein on the left and 226.5 yards for the skein on the right. Rainbow has already asked if I can make something for her with these, and I'm happy to oblige. We haven't yet figured out just what they'll become, but we have plenty of time to figure that out (I'm pretty sure it was 90 or close to it yesterday, so no one is going to be needing their woolies for quite some time).

Another skein got plied today, but it's still drying at the moment, so I'll have to get a picture tomorrow. Thank goodness for a long weekend and a WooLee Winder -- I don't think I've ever plied three skeins in such a short amount of time before!
Posted by Sarah at 8:03 PM