Thanks to those of you who left comments on my last post! I am really happy with the shawl and will be even more happy to get it out into the world, but I've got to gear up for finishing up the charts (and doing the written version of them) before that happens.

It's been a busy, somewhat crazy week. Work has been very busy and the Mister has been traveling and out late for work, leaving me to do a lot of the parenting. Thankfully that's much less exhausting than it used to be, but Miss Rainbow is now an opinionated 6-year-old who likes to do things at her own pace, so often my quiet time in the evening ends up being much shorter than I'd hoped. As a result of the diminished amount of crafting time and my diminished mental capacity at the end of the day, very little knitting has actually gotten done.

I did finish a sock, but I'm not sure that counts for much because it was already nearly done. 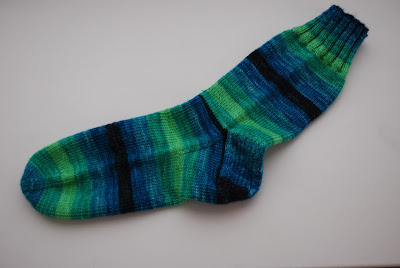 This is in Fibernymph Dye Works Bounce in Bahamian, and in a happy twist of fate, it looks like I will have to wind very little off to get to the right point in the stripe sequence to get the second sock to more or less match. It's a long mirrored sequence, so I was pretty much resigned to having fraternal socks because I didn't want to have to wind off a bunch and then splice in sections to try to match.

I've knit three whopping rows on my Hitofude, but it doesn't look much different from the last time you saw it, so I'll spare you another uninspiring picture.

Mainly, I've been knitting pouches, like these four that have been finished this week: 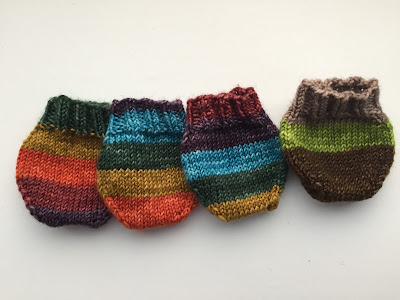 These were all knit out of FDW Bounce scraps from socks I've made in the past year or so, the three on the left from After the Harvest and the one on the right from Doubletree. I finished a fifth at lunch today and started a sixth in leftovers from these socks. Once I've gotten through my FDW leftovers, I've got some small balls of handspun that I may tackle next. These little pouches have been the perfect knitting project when I really can't think or count. I've got the pattern completely memorized, so all I have to do is stop and count rounds every now and then. An added bonus is using up all these bits and bobs of leftover sock yarn before they get tossed into the stash room. They don't do much to alter the overall bloated state of the stash, but a little is better than none, right?
Posted by Sarah at 5:28 PM