I have been knitting for more than 25 years now, so I'm a pretty fast knitter. Given how busy my life is, though, sometimes I don't get that much done even with that speed. So you can tell how much knitting time I actually got in this past weekend when you see how much progress I've made.

In the car on the way down to Maryland and in the hotel that evening, I worked mainly on my Hitofude. You may recall that the last time you saw it, I'd formed the sleeves and moved on to the ribbing around the neckline. I finished that up and bound off for the neckline before leaving, and in the car, I moved on to the patterning of the body. I'm now nearly two repeats in (each repeat is 16 rows). 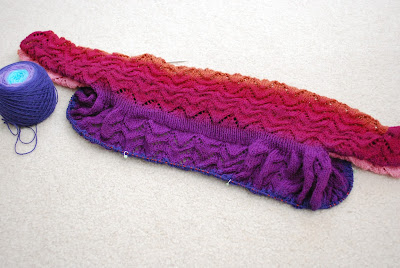 When I worked on this last night, I also officially moved from the end of the first braid of fiber to the beginning of the second. It's looking like I will still have plenty of yarn left after finishing the specified number of repeats of the lace pattern, so it's very likely that I'll keep knitting to make the body longer.

I also spent pretty much all of Saturday evening and most of the ride home working on my Mad May shawl, and it has grown significantly since last you saw it: 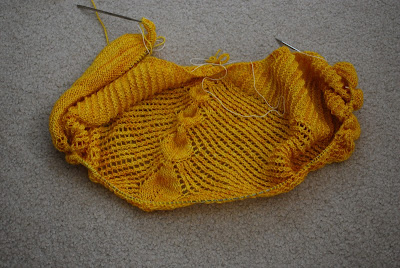 I've now finished all the patterning that I'd charted out and still have about 160 yards of yarn left, so I think I'm going to attempt another section. Just in case there isn't enough yarn for it, I've run a lifeline through the stitches on the needles to make it easy to rip back should I need to. The shawl is now big enough that I can't fully stretch it out on the needles but still looks to me shawlette size, so I'd like to make it a bit bigger if I can.

There is one other project on the needles, and it's a new one. I cast on for a new pair of socks on the way down to Maryland with the idea being that I'd have a pair in progress to work on while we strolled around the festival. In reality, I think I only managed about three rounds in total while we were actually there, so it's become my lunchtime knitting for the week. I turned the heel and started the gusset yesterday, so I will soon have a finished sock. 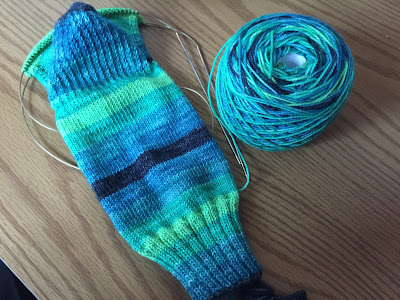 The yarn is Fibernymph Dye Works Bounce (superwash merino/nylon) in a colorway called Bahamian. It does rather look like tropical waters, doesn't it? I'm just knitting my regular plain vanilla sock pattern for these -- no sense in trying to work a stitch pattern when the striping is doing all the action on its own.
Posted by Sarah at 5:28 PM