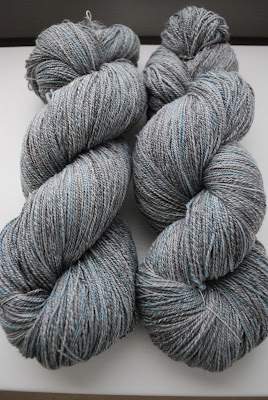 My consistency on this spin was pretty good -- my second skein was only about 10 yards longer than my first skein. In total, I have about 1,490 yards, give or take (my measurements are always estimates). That's a little less than what's listed for the pattern I want to make, but I might end up making a size smaller because I've seen a bunch of comments about the pattern running large. I'm not going to cast on just yet, so I have time to weigh my options.

After spending all that time spinning up a pound of the same fiber, I needed a little change, so I got out my August shipment from the Southern Cross Fibre club -- a luscious blend of 65% merino/35% mulberry silk -- and started a traditional three ply that I think will come out roughly DK to worsted weight. I'm already nearly done with the first bobbin. 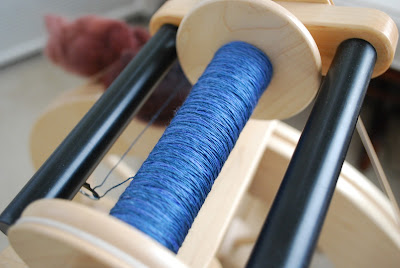 This is a such a pleasurable spin, as all of David's fibers usually are, but I feel like I'm giving myself a real treat.

Speaking of SCF club shipments, my September shipment showed up earlier this week. This month's selection is Rambouillet, and the color David selected for me is called Allium: 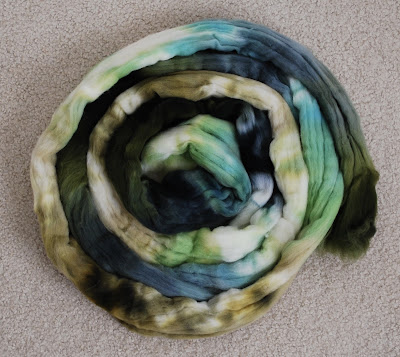 The color isn't quite accurate; the greens are a bit brighter and more prevalent. I also ordered the other colorway for the month because I loved it as well, but it'll be coming in a separate shipment. And my next FatCatKnits club shipment should be here tomorrow as well -- lots of fiber coming in! I guess the timing has worked out well, because next Saturday is Indie Knit and Spin, and I will have a large amount of handspun for sale. If you're in the greater Pittsburgh area, please come by and see me!
Posted by Sarah at 2:17 PM