Keep Calm and Knit On

It's been a very emotional couple of days here. I don't want to get into politics because this is a knitting and spinning blog, but I'm sure you're all aware of the outcome of the presidential election in the United States. I didn't get much sleep the other night, as I was up late watching the returns, and frankly I don't deal well with uncertainty, so I haven't been at my best. At times like these, I'm glad I have my crafting to turn to for calm.

I have certainly been doing a lot of knitting the past several days. Over the weekend, I cast on for a hat for Rainbow after she admired the one I wore to go running Saturday morning (it was something I whipped up a couple of years ago in a very bright neon pink acrylic). I decided to make her one, and I found an old skein of Patons SWS (now discontinued) in my stash that I thought would work well. I finished it on Tuesday evening, but I'm not sure that I'm actually going to give it to her. 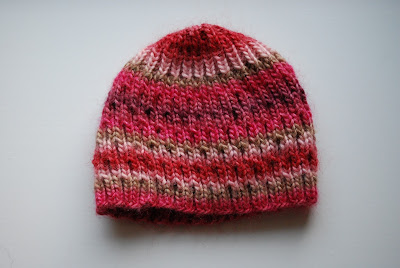 For one thing, the yarn was not the best choice. It's a singles yarn, which made it rather difficult to work the two-stitch cables and resulted in poor stitch definition. I was also worried that I'd run out of yarn, so I made it an inch shorter than mine and went down in needle size, and I think it actually might be too shallow for her. So chances are good that I'll turn this into a felted bowl and knit her another hat out of something more appropriate.

I spent a lot of time working on the handspun shawl on Tuesday evening, and I'm now in the home stretch -- and the knitting is bigger than my circular needle, so I can't fully stretch it out to show you. I just hope the yarn I have left holds out! 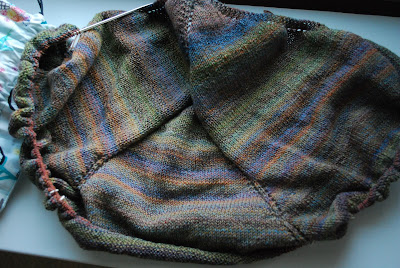 I have not yet cast on for my sweater, but I have a feeling that will come soon. In the meantime, I have decided that everyone in the extended family will be getting mittens this year. I have two pairs done, so that means I have five pairs left to knit. I can knit a pair in a couple of days -- probably faster if I am only knitting on them -- so that seems doable. We'll likely be having our family gift exchange in early to mid-December, so that means I have about a month left. I've had a good dig in my stash and pulled out an assortment of worsted weight options, and the third pair has already been cast on in some leftover Cascade Eco Wool. 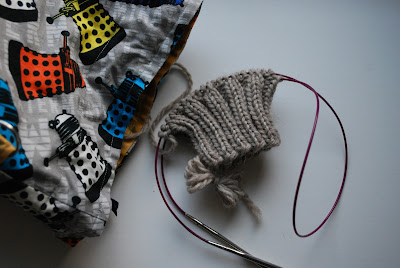 I did want to mention that this weekend is Indie Knit & Spin. I'll be there selling some of my quickly growing stash of handspun, including some skeins you've seen on the blog in recent weeks. If you're in the Pittsburgh area or an easy driving distance away, I really encourage you to come and stop by this show. It's a small show, but it has some really great vendors. There will be demonstrations going on throughout the day as well as a raffle with some great prizes!
Posted by Sarah at 7:49 PM