After my pound of merino yarn, I needed something much faster and more in the way of instant gratification. I found it in my August Southern Cross Fibre club shipment, a really delightful merino/mulberry silk blend. I decided for a thicker than my usual three ply, and that's exactly what I got. 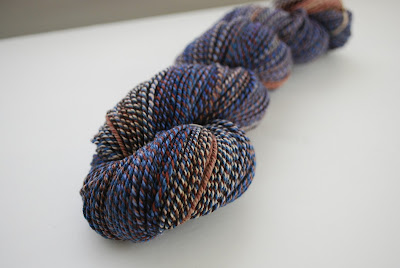 This skein looks to be about DK weight and roughly 224 yards. I'm not sure what I'm going to do with it, but it sure is satisfying to squish.

I got started on my next spinning project yesterday while I was manning my booth at Indie Knit and Spin. I had pulled out my last shipment from the FatCatKnits club -- two colors of Rambouillet inspired by lobsters -- and split each color into thirds for two traditional three-ply yarns. My hope is to use the two colors together, provided there's enough contrast between them. I've already completed two of the three bobbins of the first color. 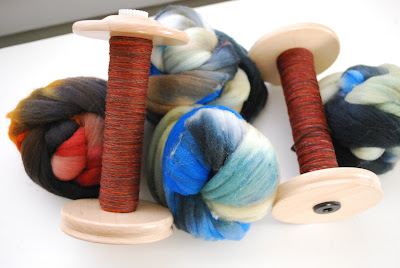 Speaking of FatCatKnits, I received two packages from Ginny earlier this week, the next club shipment and another order. The club shipment is on Falkland: 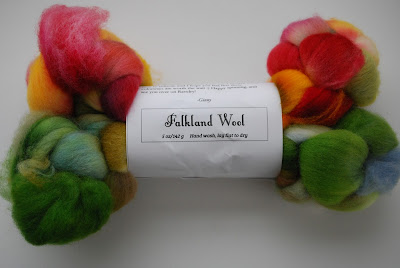 The other order was this vibrant braid of Targhee: 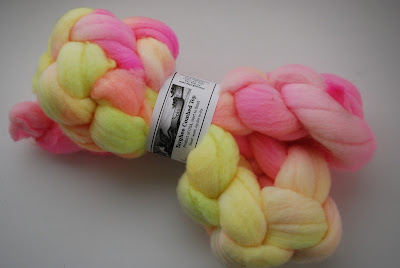 As if that wasn't enough fiber for one week, I found this beauty on the giveaway table at IKS: 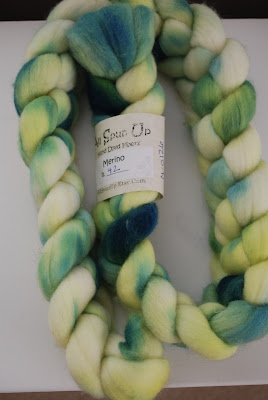 This is 4.2 oz. of merino from All Spun Up, my former favorite indie dyer from when I was just getting into spinning. This has clearly been in someone's stash for quite a while because Kristin hasn't updated her Etsy shop in quite some time, but I was thrilled to find it and will certainly give it some love!
Posted by Sarah at 7:36 PM