The Mitten Factory Is Closed

It took staying up a bit late last night, but I'm happy to report that the last pair of holiday gift mittens is officially off the needles! Here's a look at the pile: 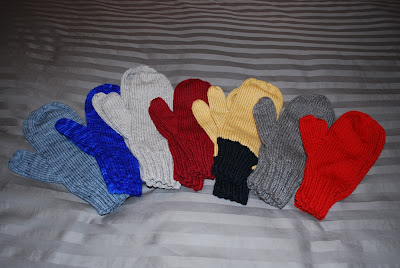 All of these were knit using Susan B. Anderson's Waiting for Winter Mittens and Fingerless Mitts pattern, with some minor modifications. I believe the original pattern has you put the thumb gusset in at the end of the round, but I put it in the middle so that the beginning of the round falls on the outside edge of the wrist/hand when the mitten is worn. I also used lifted increases rather than the m1s called for. I adjusted my needle size on some of the mittens using thicker yarn (those would be the pairs worked in Cascade Eco Wool; I went up to a US 6/4.0 mm for those), but most were knit on US 5/3.75 mm needles. The other yarns I used were Knit Picks Telemark and Merino Style (both discontinued), Malabrigo Merino Worsted, Blue Moon Fiber Arts Targhee Worsted, and Valley Yarns Amherst.

I can't promise there won't be more of these mittens, especially since I've pretty much got the pattern memorized now and I have lots of worsted leftovers that would make great mittens to donate, but I do need to take a brief break.

Finishing off that last mitten meant that I was now free to finally cast on my Gift-a-long projects! The first one to jump on the needles was a new-ish pattern called Eiswasser. I'm knitting this for Rainbow as a gift, and it's a surprise, so that means I can only work on it at work or after she's gone to bed. It's not going to be a quick knit by any stretch of the imagination (the cast on starts with 156 stitches, and that stitch count doubles once the ribbing is done to accommodate all pull-in of the cables), but I think it'll look pretty amazing. 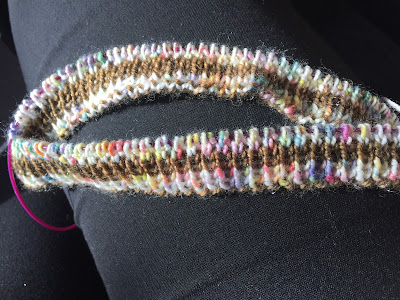 The yarn I'm using is some Fibernymph Dye Works Bedazzled in Cake Pops that I bought several months ago with the intent to make something for Rainbow. I think the stitch count is going to be large enough that I won't really get stripes once I get to the cabled part, but that might be better because it won't obscure the stitch pattern as much.

The other GAL project I'll be starting this evening is the Dancing Leaves Cardigan I've been swatching for over the past week. I did finally get gauge on US 1.5/2.5 mm needles (yes, you read that correctly!), so it will be a very fine gauge knit and will likely take me all of the GAL period to finish, if it fact I can finish it by then. I figure that if I can limit myself to working pretty much exclusively on these two projects, I can get them done.

But who am I kidding? There's another project on the needles for when I need a break from thinking -- just a pair of plain stockinette socks in FDW Traveler (Lisa's sportweight base) in the colorway Coffee at Luke's. I cast them on after Thanksgiving dinner, thinking they'd be good to work on during the Gilmore Girls: A Year in the Life marathon I had with my mom the next day. 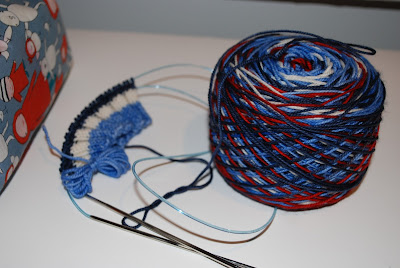 I suppose it's probably not a bad idea to have a fairly mindless project on the needles for those times when I want to knit when Rainbow is around!
Posted by Sarah at 8:31 PM