Have you spun Rambouillet before? I haven't (we won't mention the Rambo fleece that's been sitting in my stash unspun for sevveral years), so I was very pleasantly surprised with my latest spin, half of a FatCatKnits club shipment. The two colorways were inspired by lobsters. I decided to spin up each colorway as a traditional three ply with the hope that I could use both skeins together in some sort of colorwork. I picked the reddish colorway, Clawd (hehe), to spin first. It turned out exactly as I hoped. 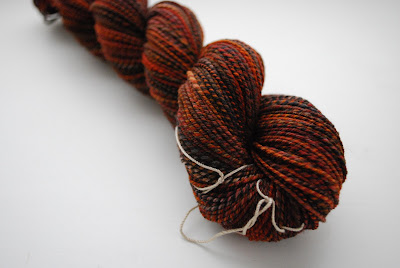 It is fluffy and plump and soft -- and boy does it have major spring to it! The whole skein has great elasticity. To give you an idea of just how much sproing we're talking about, consider this: I wound the skein off on my two-yard (72 in.) niddy noddy. After it was washed and dried, the skein had shrunk up to 51 in. If that doesn't give you an idea of the amazing crimp of this fiber, I'm not sure what would.

I've already started on the second colorway in the shipment, a medley of blues and greens called Gamma. The first bobbin is almost finished. 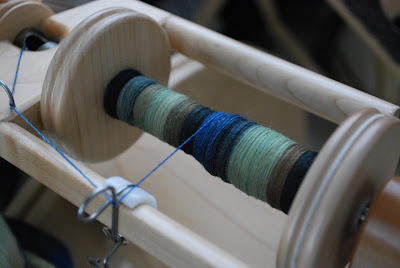 The colors are very distinct now, but I'm approaching this colorway in the same way I did the first: Each little bundle of fiber is being split into four strips (I've found the fiber is a little easier to draft this way) and then spun end to end. My hope is that the colors will mix up when the yarn is plied for an overall blue/green shade.

One thing this spin has taught me is that I LOVE spinning Rambouillet! I predict that fleece will not be neglected for much longer.
Posted by Sarah at 5:48 PM