Every time I start to get excited about the weather getting to be perfect for sweaters and socks, we get another heat wave. Over the weekend, it was in the 70s again, and it's expect to hit 75 tomorrow. I've still been wearing my hand-knit socks, for the most part, but there have been days when my feet have been rather warm. I'm not really in a rush for winter, mind you, but I do enjoy wearing my handknits, and I would rather have some consistency -- I actually went to pick up Rainbow from Sunday School wearing a t-shirt and sandals, and then yesterday I was wearing a turtleneck sweater!

In spite of the weird weather, I did manage to finish another wool project over the weekend, and it's another pair of mittens. 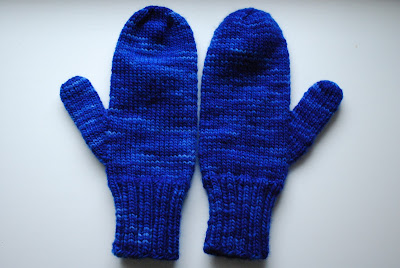 These were a piece of cake and I hardly had to think about what I was doing. They were so quick, too! I probably could have knit a mitten in a day were it not for that pesky thing called work. I did change up the increases a bit, mainly because I wanted to see how they looked compared to the increases called for in the pattern. I also picked up a couple of extra stitches when I started the thumb to help eliminate the gaps, but I decreased those away in the next round. I still haven't decided who is getting these mittens, but at least I have another gift done.

I am extremely close to finishing Rainbow's Gramps Cardigan; I only have two rows and a bind off left to do on the collar/button bands, underarm grafting, and ends to weave in. All that should be completed this evening, and once Rainbow picks out some buttons, she'll be able to wear her new sweater to school!

I cast on a new project for my lunchtime knitting, though in a way it's also kind of an old project. Remember the multicolor shawl I finished a few weeks ago? I'm knitting it again, but this time I'm working it in stockinette and using yarnovers for my increases. 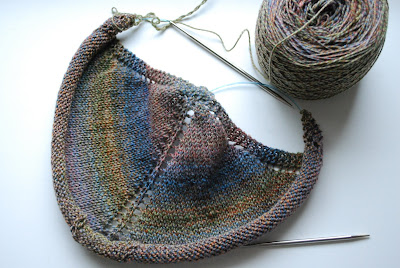