Can You Guess What I'm Knitting?

Another day, another pair of mittens on the needles. I did finish up the nearly done pair you saw earlier in the week shortly after I posted, so that's one more pair off the list:

These were really much faster to knit than the start and end dates would lead you to think. I put them aside for several days to finish up another project (more on that in a moment), but when I did pick them up, they got finished very quickly. The pattern calls for a worsted weight, but the Eco Wool is more of a bulky, so these turned out a little larger than they would have if I had used the right weight of yarn. That's not necessarily a bad thing, and certainly the thicker yarn meant a faster knit. I have another color that I'm planning to use for another pair, and I think I will use the same needle size but go down to the size large in the pattern.

As soon as I had cast off and finished weaving in ends on these mittens, I cast on for the next pair. These are for my brother, who is a big sports fan, so he is the lucky one who will get black and gold mittens (conveniently, all our local sports teams use the same colors). The first mitten is done and the second will be started this evening. 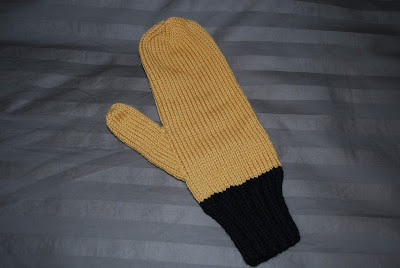 I worked on this pair last night when I finally made it to the Steel City Fiber Collective for their weekly knit night last night. I saw some familiar faces and some new ones, and it was nice to spend a bit of the evening with other knitters again. I didn't stay very long, as Rainbow was a bit clingy before I left and gave me sad puppy dog eyes while she asked me to come home in time to put her to bed, but I'll definitely be back.

After I posted on Tuesday, I did indeed block my finished shawl. I'm very pleased with how it turned out. The shape is the same as the first sample, but the look is really different. With the yarnover eyelets in this version, the shaping is a bit more obvious.


I've already gotten a draft of the pattern written up, so now I have to do some final measurements, make a schematic or two, and take some photos.

This weekend should be a busy one, though we really don't have much scheduled. We are having some windows replaced on our third floor next week, so that means cleaning out the rooms up there, one of which is the spare bedroom I refer to as my stash room. It's in a bit of disarray (I tend to just toss stuff up there and grab it when I need it), so I'll have to put everything into bags or bins so that we can move it to a closet or the basement while the work is being done. I'll have to take down my swift as well, so I'll need to wind yarn that I'll need in the coming week or two, and I'll need to make sure any yarn or fiber I want to use in the foreseeable future is easy to access. I suppose that for as much of a pain as it will be, it will also be useful in that I'll organize things and clean out random crap that I've tossed in that room over the years.
Posted by Sarah at 6:06 PM