It's another Tuesday, and another pattern from my Stitchburgh collection is ready to make its debut. Presenting the River Waters Shawl! 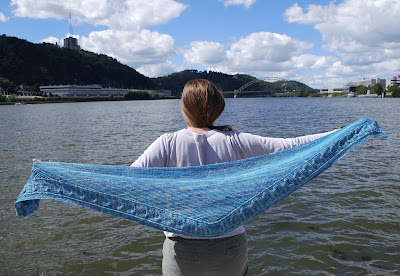 This design was inspired by Pittsburgh's three rivers, the Allegheny, the Monongahela, and the Ohio. In fact, the spot where I'm standing in the photo above is where the first two come together to form the third. The ribbed cable band along the lower edge of the shawl represents the movement of the water in the rivers, as the cables twist toward the center from the outer edges just like the Allegheny and the Mon converge to form the Ohio. 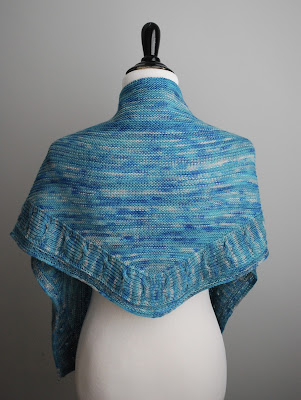 This shawl is worked in several directions for an engaging knit. You start by knitting that long ribbed cable band. When that is complete, you pick up stitches along one side of it and use short rows to shape the garter stitch body. Finally, you pick up stitches along the other edge of the band to knit the bottom border. This pattern will challenge you a bit -- you need to know how to do a provisional cast on, work ribbing and cables, pick up stitches, do short rows with w&t, and do an I-cord bind off -- but no one element is particularly challenging. It's definitely one of those patterns that looks more complex than it is. The ribbed cable band, for instance, is basically the same row repeated over and over again except for the one row with cable crosses. 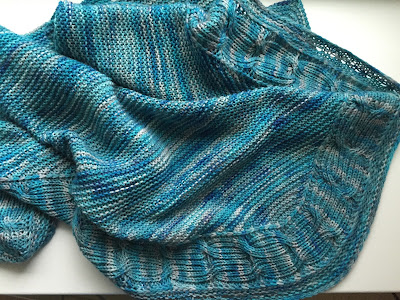 Before I sign off, I wanted to mention that the fourth annual Indie Designer Gift-A-Long officially kicks off tonight at 8 p.m. EST. The pattern sale (in which between 5 and 20 patterns from every participating designer will be 25% off with the coupon code giftalong2016) runs from the start of the GAL through November 30 at 11:59 p.m. EST. All participating designers will have a bundle of their on-sale patterns featured on their Ravelry designer page; you can find mine here. The GAL itself will run through the end of the year, and I highly recommend joining the group and participating in the -alongs. There are tons of prizes to be awarded (both physical prizes and coupon codes for free patterns) as well as lots of fun games and camaraderie!
Posted by Sarah at 6:43 AM