My daily decision about what to knit just got easier, because I now have a choice of two cardigans: the Mister's Neighborly Cardigan and my Floozy cardigan. Those are my only projects on my needles now because, thanks to a late (for me) night on Saturday, my Fibernymph Dye Works minis shawl is done! 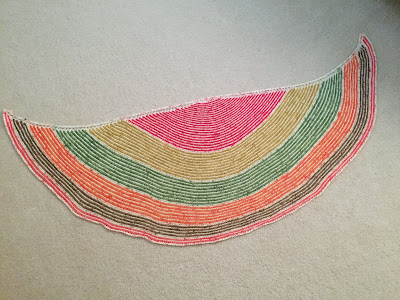 It's pretty big -- you just don't get a sense of scale here -- and, more importantly, turned out as I was hoping, so now I just have to finish writing up the pattern, take some real photos, and get it off to my tech editor. I stayed up late to finish and block it so that I could take it to Indie Knit & Spin on Sunday to show to Lisa. Of course, I didn't go just to show her the shawl; some shopping occurred as well (it turns out that Rainbow is growing into quite the enabler). 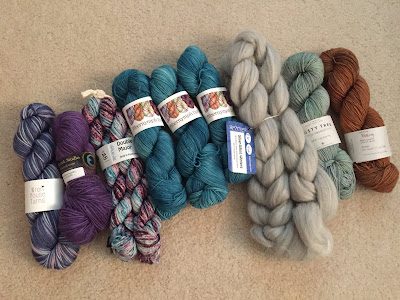 Aside from the bit of show and tell, my primary reason to go to the show was to get yarn to make Rainbow a Little Boxy. I had already checked with Lisa to see if she would have some semisolid in a blue available, and so we came home with three skeins of Bounce in Peacock Blue (the three skeins in the center). After that, we went a little wild. I'd like to point out that of everything you see in this photo, only the braid of fiber from HipStrings and the two skeins of Dusty Tree Dyeworks ROOT on the far right are for me -- everything else is for Rainbow! She picked out the HipStrings Double Major (just to the left of the yarn for her sweater) for some thicker socks for her and then went gaga for the skein from Wren House Yarns on the far left. As if that weren't enough, she then won the purple skein of DK from Unplanned Peacock Studio in the raffle toward the end of the show. I guess I should take her yarn shopping more often!

Obviously there will be a lot of small person knitting in the future, but for now, the focus is on sweaters. Now that the shawl is complete, the Mister's sweater has become my lunchtime knitting, and I'm a good way into the back. It doesn't look very exciting, so I'll spare you a progress photo until something interesting happens. Working on that during the day has freed up my evenings to focus on my sweater, which finally seems to be making some progress. Last night I did my first rows using the third and final color, and I'm really pleased with how nicely the colors are playing. 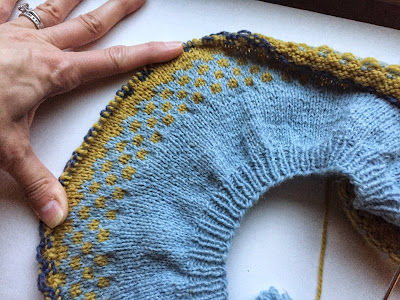 The contrast isn't quite as stark as it looks here, but that's early morning November light for you. I'm glad I decided to use the contrast colors in this order because I think the medium blue really pops well against the yellow.

Knitting this sweater is so different from knitting the Mister's, namely due to the yarn. His is knit from a supersoft superwash merino, and this Blacker Classic is decided not that -- it's much more rustic and wooly. I don't really need such a sticky yarn for this pattern, but I can see that this yarn would be perfect for stranded work that is steeked -- it's not going anywhere!
Posted by Sarah at 11:16 AM