A Taste of Things to Come

We woke up this morning to this: 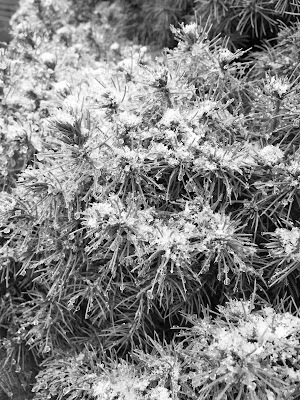 I've changed it to black and white, but that's some wet snow on our little evergreen tree, and I think it counts as the first official snowfall of the season. There was nothing on the ground when I first got up this morning, but it's been swirling around since then and it looks like we might have something measurable later in the day (with my luck, just in time for the evening commute).

There's nothing like snow to motivate me to finish up some projects, which is a good thing because I have two projects I'm especially keen to see off the needles this week. First there are Rainbow's latest socks, which I'm going to make proper knee socks. 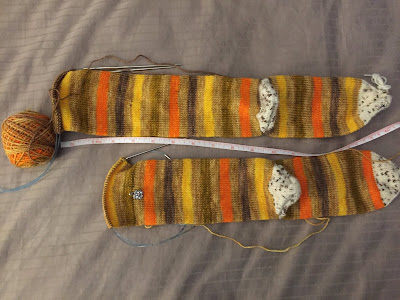 Although it's hard to see and not exactly laid out right anyway, the measuring tape in the middle is there to show you that the sock on the top of the photo is almost ready for its cuff. We measured Rainbow's leg over the weekend and determined that 12 inches above the heel is the proper length for her, so I'll be knitting the self-striping to 11 inches and joining the contrast color for the last inch of ribbing at the top. I did most of the additional length (I was at 7 inches for both) on the top sock on Saturday while we were out and about, so I know it won't take me long to get the second sock to the same place. These are being worked on size 1/2.25 mm needles and are 56 stitches around, so they grow pretty quickly. Rainbow isn't bugging me for these, but I'm hoping to start a pair of socks for my soon-to-be-sister-in-law for Christmas and would like to get these finished first.

The other WIP that I'm hoping to finish is the shawl I'm designing. I worked on it for several hours on Sunday, when I camped out at a Panera after dropping Rainbow off at a birthday party. I'm on the edging now, but the rows are also getting very long at this point. 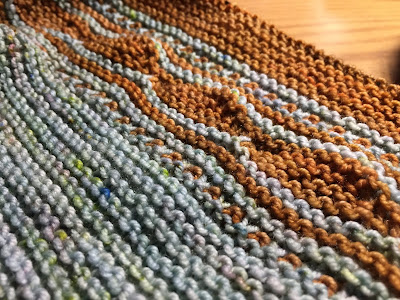 The only deadline for this one is self-imposed: This Sunday is the fall Indie Knit and Spin show, and I'd really love to have this sample done so I can show it to Rebecca (the dyer of the yarn) in person. I've had a slight delay in that last night I decided to rip back most of the border -- I was trying something a little different and it didn't work out as I was hoping. I'm doing something much simpler now, which means that it's more mindless and therefore faster, and I should get back to virgin yarn from the cake during my lunch break today.

While I was at the Panera on Sunday I also finished up The Alice Network, and good thing, too, because my hold on Inland came up on Saturday. I quite enjoyed the former, more so than some other similar books I've read this year, and am about 20 percent into the latter. I'm not sure how I feel about it just yet; I'll admit I'm a bit confused and feel like I'm missing something, but I'm trusting that the story will come together eventually and will stick with it. I'm expecting to get the audiobook of The Dutch House in the next few days (as of this morning, I'm ninth in line), so I'm hoping to finish Inland before then.

Speaking of reading, if you've read Just Mercy along with us, I hope you'll join us today over at Bonny's blog for discussion!
Posted by Sarah at 9:43 AM