I almost always have more than one project going at a time, usually at least two (one small, portable project to take on the go and one larger one to work on at home). At the moment, I have four projects active, which might just be one too many -- or at least one more than I can work on. So three are active at this point in time.

First, there's my mosaic dishcloth, which I'm actually hoping will be finished tonight. 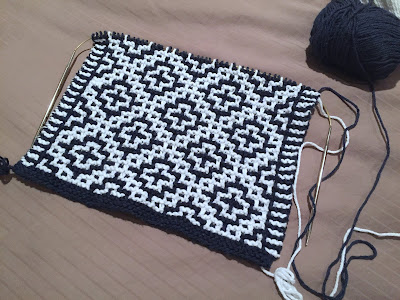 I spent all of my crafting time last night (about an hour and a half, once I got Rainbow clean and off to bed) working on this and as a result have only about 20 rows or so left to knit. I've uncovered two minor errors in the chart thus far -- two squares in the lighter color that should be the darker color -- but otherwise have had no problems. This little dishcloth has even impressed the Mister, who's pretty much lost the ability to be impressed by my knitting in recent years after being exposed to so much of it, so that's saying something!

I have been alternating working on the dishcloth this week, at least in the evenings, with my granny square blanket, which I think it's fair to say I'm pretty obsessed with. I took this photo on our bed this morning so you can get a sense of the size (that's a queen bed, for reference). 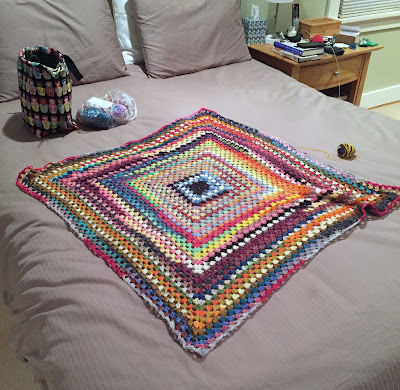 I'm still working on the bag 'o scraps, but there are fewer little balls of leftovers in there than there used to be. I will soon be moving on to my Fibernymph Dye Works Holiday Countdown Minis (yarn advent calendar), which Lisa has dyed so that they flow together, which should make for an interesting effect here.

Finally, I've turned some renewed attention to the shawl I'm designing, which is still just a plain garter stitch triangle but will soon start to have some interesting things happening when I introduce the other color.


I'm still waiting for my hold on Inland to come up from the library (I've moved up from seventh to fifth in line!), so yesterday I started reading The Alice Network via Hoopla. I'm only about 10% in, I think, but am enjoying it so far. It seems that I've gotten into a niche of reading books about women in WWII who are involved in covert operations.

We are expecting our first snowfall to arrive later today and have a quiet weekend planned, so I'm hoping to catch up on some rest and get a good amount of crafting done. I hope that whatever you have planned, it brings you joy!
Posted by Sarah at 9:26 AM