It's Thursday, so let's keep things short and to the point with a list, shall we? Today's list are the three stages of any project as represented by the current state of affairs, slightly out of order because of what's top of mind for me today.

1. Finished
Last night I finished up the new shawl, which clearly is still in need of a good block but is making me very happy today. I even flung it over my shoulders for a while last night to keep warm. 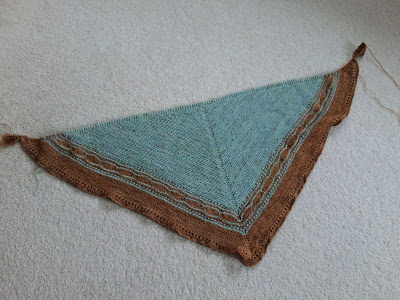 It looks more impressive when the light isn't so faint, but the clouds are still hanging around for at least another day. I'm going to try to get this blocked tonight as well as to finish up the draft of the pattern. I'm still stuck for a name, though -- it's always the hardest part for me! I have to come up with something that feels right for the design, hasn't already been used, and doesn't mean anything bad in another language. Suggestions are welcome!

2. Almost Finished
They've grown a bit since this photo was taken, and now Rainbow's knee socks are just about finished. 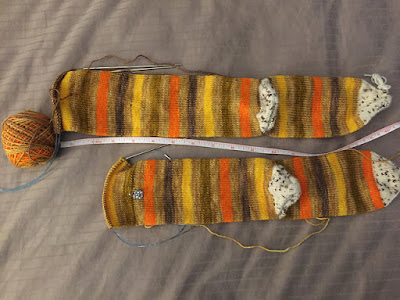 Between the two socks, I've got about three more inches of knitting, perhaps a tad more, before they'll be ready to be bound off. I may not finish them during my lunch break today, but I'm certain they'll be done before I go to bed tonight. That leads me to ...

3. On Deck
I have several things I'd like to start next, but high atop that list is a pair of socks for my almost-sister-in-law for Christmas. I already know what yarn I'm using, so I just have to dig it out of the stash and wind it. I also have a new hat design to knit up, and I'd like to start another giant brioche infinity cowl out of handspun as a gift for a friend. And I would like to cast on for a new sweater as well, but I have a bunch of yarn that has to be wound for that and will likely wait until the weekend to take care of it.

I managed to finish Inland last night and sadly did not much enjoy it. I just don't think Westerns are for me, though I certainly appreciated the writing. I'm still waiting on my hold for The Dutch House (currently holding at number 6 on the wait list), and I don't think I'm going to start anything new before I get it because I just know if I do I'll immediately shoot to number 1.

We've got a bunch of stuff planned this weekend -- Rainbow and I are going to have our bridesmaid dresses fitted, I've got a haircut, and there's the fall Indie Knit and Spin show on Sunday -- but I'm hoping to squeeze in some extra crafting time!
Posted by Sarah at 9:53 AM