I Blame the Food Coma

I fully intended to put up a post yesterday, as I usually do on Thursdays, but yesterday was no ordinary Thursday. As you probably know, it was Thanksgiving here in the United States, so we were all home and had a somewhat leisurely day. After I took my time drinking my coffee (which never happens on a typical weekday), I got to work on the cooking.

My parents were hosting the big meal, as they always do, but with the size of the crowd increasing over the years, my mother has ceded some of the cooking to the rest of us. Our assignments were the vegetables (roasted Brussels sprouts and green bean casserole) and, as we've done for the past several years, pumpkin muffins (basically pumpkin bread in muffin form that's served alongside the dinner rolls). Last year, we overbaked on the muffins, so while Rainbow and I still made two batches (one with craisins, one plain), we made only two dozen muffins per batch and used the extra batter to make two loaves of pumpkin bread to keep. 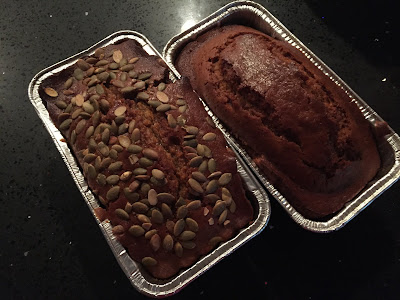 I got a little fancy and topped the one with craisins in it with some pepitas leftover from a salad kit. Rainbow, of course, won't touch the topping, but at least I can enjoy it.

While the muffins and bread were in the oven, I sat down and finished the giant handspun cowl. It's now drying from its bath, so it's not as fluffy as I expect it will be when it's dry, and it's a gloomy day here, so apologies for the less-than-stellar photo. 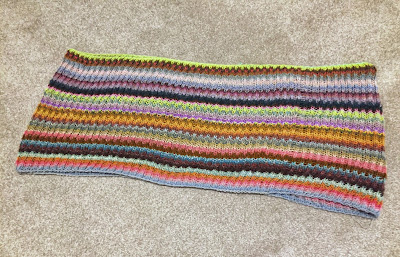 I'm happy with how this turned out, especially that I used pretty much every last inch of the yarn (I even played a little yarn chicken on the bind-off round), and I can't wait to deliver it to the recipient.

Thanksgiving dinner was wonderful and I ate way too much, though I'd decided ahead of time that I wasn't going to worry about it for the one day. Just as good as the food was the company. In addition to our family (the three of us, my parents and brother, and my in-laws), we were joined by my brother's fiancee and her family -- her parents, her brother and sister-in-law, and her two nieces. My brother- and sister-in-law and my nephew joined us for dessert after they had dinner with her family. I kept my phone in my purse for most of the night, but I did pull it out toward the end to capture a few family photos. This one might be my favorite: 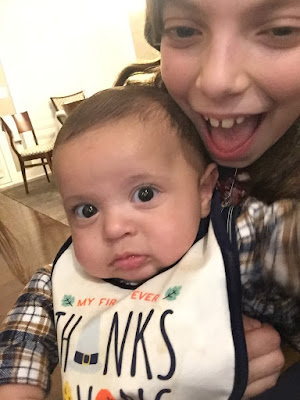 What you can't see under his bib is that he's wearing suspenders to go with his plaid shirt and khakis. Too cute!

Today we're enjoying another quiet family day at home. No Black Friday shopping for us -- Rainbow and the Mister are busy building the giant Lego set that they've decided counts as Rainbow's birthday present and a present for him, and I'm planning on doing some knitting and spinning. We're all looking forward to having a relaxing weekend together before the wedding craziness of next weekend!
Posted by Sarah at 9:33 AM