Today I have three suggestions for things you might want to do this weekend.

1. Read The Dutch House.
Even better, listen to the audiobook, which is expertly performed by Tom Hanks. I finished listening yesterday and loved every minute of it. Ann Patchett is an author whose work I've long enjoyed, and her newest might be my favorite. I'm fairly certain I would have enjoyed it just as well had I read the book on my own, but having it read to me by the wonderful Tom Hanks was pure pleasure. It got a five-star review from me, and it's a book I could easily see myself rereading in the future.

2. Speaking of Tom Hanks, go see It's a Beautiful Day in the Neighborhood.
We were very lucky to be able to attend the Pittsburgh premiere of the movie last night (thanks, WQED!), and I think it's fair to say it was a hit with the whole audience. Though we were not graced by the presence of the stars, sadly, we did get an introduction to the film from the director; the writers; several of the producers; and Tom Junod, who wrote the original article upon which the film was based. The movie was wonderful, and Tom Hanks does a marvelous job of portraying Fred Rogers, even down to how he holds his body. I think that as a Pittsburgh audience, we especially enjoyed seeing places in Pittsburgh we could identify (for instance, the pool where Mr. Rogers is shown swimming laps is our JCC, where I swam laps when I was on the swim team in middle school!). Keep an eye out, too, for brief cameos by Mrs. Rogers and David Newell (aka Mr. McFeely) in the scene in the Chinese restaurant. 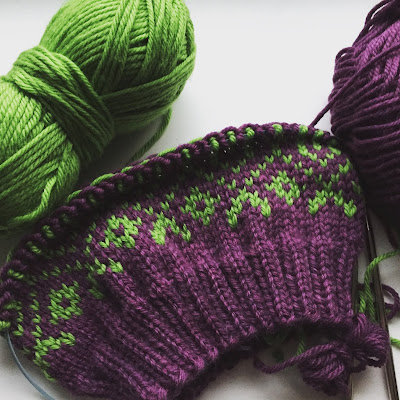 What you see here is the result of two evenings of work, and not even two particularly productive evenings. I have a board meeting this evening, but I'm hoping that it'll be done early enough to allow  me to finish up the colorwork portion of the hat when I get home. It'd be great to finish the entire hat by the weekend so I can send off the pattern to my tech editor before Thanksgiving!

Hop on over to Carole's to see what everyone else is up to today, and have a wonderful weekend!
Posted by Sarah at 7:15 AM