As I mentioned in my last post, I was away at the end of last week and for part of the weekend at Vogue Knitting Live in Columbus, Ohio, with my friend Lisa. When she first floated the idea to me, I wasn't sure I could go away again so soon after Rhinebeck, but looking at the course offerings convinced me. Plus, Lisa and I had a lot of fun last summer at TNNA, so I was definitely up for another girls weekend trip with her. I love learning new things, and this event was a perfect excuse to do just that.

Because I had finished up the baby sweater right before I left, I thought I'd use the drive to Columbus to knit up a coordinating hat. I'd seen several people knit up the From Where You Were Plucked baby hat recently, so I printed out the pattern and cast on in the car. It really should have taken me only a few hours to get through the hat (it's a newborn size, after all), but I was apparently too cocky about my ability to follow the pattern and completely misread it, resulting in my having to rip back to the start of the decreases not once but twice, meaning by the time I'd finished the hat on Friday evening I'd essentially knit it twice. Whatever -- it's done and it's cute, though I must say that I didn't expect it to look quite so phallic with the knot untied. 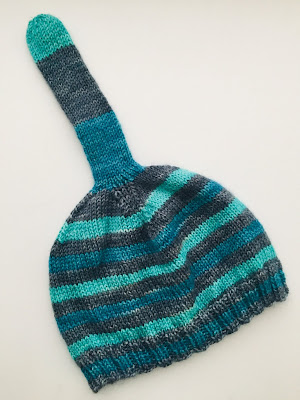 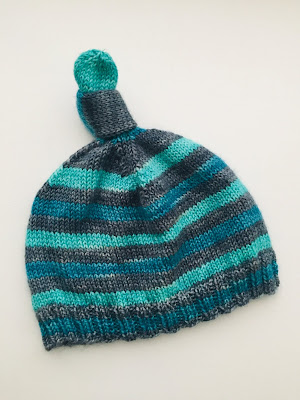 Though the pattern is sparse in its instructions, it's really not the fault of the designer that I messed it up so badly. I just didn't read! This sweet hat used less than a quarter skein of yarn, leaving me some leftovers for my granny square blanket. I have a feeling that it will be a go-to pattern moving forward.

While at VKL, I took three classes. First was a class on mosaic knitting with the always-charming Franklin Habit, who was delightful and highly informative despite having taken nine hours to get from Chicago to Columbus the prior day (eight of them spent sitting in O'Hare waiting for his delayed flight). Some of his samples didn't make it, but he improvised quite well and has gotten me hooked on mosaic knitting already -- I've since started a dishcloth project using some kitchen cotton and would be knitting it all the time were it not for the fact that my hands can't handle cotton for very long and I have to switch to wool after a while.

The second class was on the contiguous sleeve method with Amy Detjen, who taught us some useful knitting technique skills in addition to walking us through this novel method of sweater construction. We knit up a small version of a contiguous sweater in the course, and though it doesn't quite work as a sweater for Rainbow's American Girl Doll, it looks like we can make it work as a caplet, so I've kept it on the needles to add a bit more length.

Finally, Lisa and I both took a class with Maria of Ninja Chickens on the use of herbs for food, medicine, and dyeing. We learned about a series of common herbs and used three to dye some mini skeins of yarn that we got to take home. 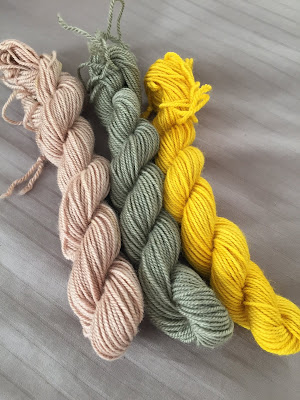 These were dyed, from left to right, with elderberries, rosemary (with the addition of a metal salt to shift the color to be more green), and turmeric. I'm particularly enamored with that golden yellow from the turmeric, though apparently it's a color that fades over time.

We did wander through the market a bit, though I was not necessarily looking to buy anything (especially yarn), and I limited myself to two purchases: 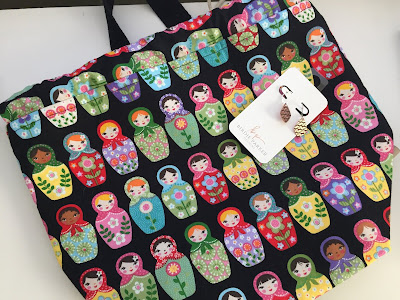 The project bag is from Twisted Yarn and Fiber and has now become the container for my granny square blanket. Here's a closer look at what's sitting on top of the bag: 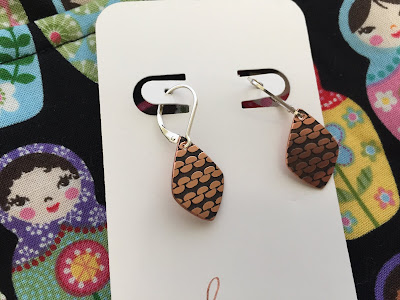 I'd been regretting not buying a pair of earrings from Birdie Parker at Indie Untangled at Rhinebeck, and luckily a vendor had them. There were only a few styles to choose from by the time I found them, so I went with these coppery garter stitch dangles. I've already worn them, too!

It made not have been the most restful weekend, but it was a fun one. Here's hoping it's an event that happens again next year!
Posted by Sarah at 1:25 PM