After four lovely days off, I am back "at work" today (already dealing with a noisy inbox), but before I get my head totally back into work mode, I wanted to share some results of my long weekend.

As you know, I've been focusing on finishing projects this month, and late last week I finished my oldest active WIP, the C2C crochet blanket.

I used this tutorial (Ravelry link) to get me started with a size E/3.5 mm hook and a giant ball of baby acrylic from Michaels that Rainbow had started crocheting into a granny square blanket and lost interest in. My plan was to increase until I'd used half the yarn (by weight) and then start decreasing, which theoretically should have resulted in having just enough yarn but in practice didn't quite work out that way. So one corner of the blanket was finished with some white Lion Brand Baby Soft that I inherited from my mother awhile back. After I finished the final square, I added a simple border of single crochet around the outside edge to stabilize it, and then I gave the entire blanket a generous steaming with an iron. I'm not sure if I officially "killed" the acrylic, but it's certainly much softer and has more drape. In all, I used 1,185 yards of yarn, which seems like a lot given that the blanket is only about 31 inches by 31 inches square. But it does make a nice lap blanket (I've been putting it over my legs the past few evenings while I knit and watch TV), and more importantly I've now got another way to crochet a blanket in my tool box -- and I'm eyeing my giant bag of sock yarn scraps and pondering another blanket now.

Rainbow and I also did some sewing yesterday, and I used the opportunity to complete another item on my 21 in 2021 list. 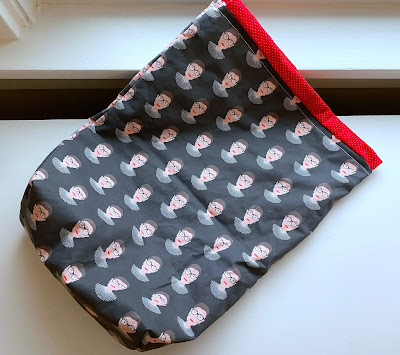 I used up the last of the RGB fabric that I ordered from Spoonflower last year for this project bag (I wanted to maximize what I had left, which is why this is so tall). I also felt pretty smug because I repurposed a cloth bag that a piece of luggage came in for the lining and I adapted the basic pattern from the drawstring bag tutorial I'd used in the past. Rainbow made her own bag alongside me as well. Both bags are a bit wonky because we weren't being terribly exact about measurements (or, as is likely apparent in the photo, about pressing the fabric), but they are perfectly functional. All that remains for my bag is to do something about drawstrings; I had some cotton rope that came from the cloth bag we repurposed, but I we used that for Rainbow's bag and there wasn't enough for both. So I'll likely need to make and sew up some bias tape for mine, or perhaps I'll use my lucet and make some cording.

Finally, there was cooking this weekend. On Friday, we successfully baked another challah (thanks in large part to the fact that the Mister was in Zoom meetings all day -- though I did put a sign on the oven warning him not to touch it just in case!): 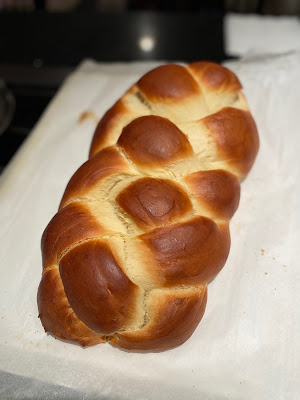 And we made dinner for Valentine's Day as well. After flipping through quite a few cookbooks, we settled on a menu of baked shrimp scampi with a side of pasta aglio e olio and green beans. The star of the meal, though, was dessert: 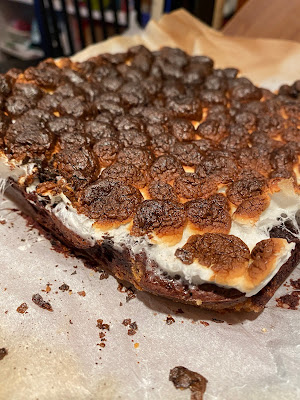 These are s'mores brownies that we made more or less following this recipe (we were making a smaller batch, so we used fewer graham crackers and less butter for the crust). I did accidentally burn the marshmallow topping and set off the smoke alarm (oops!), but I actually like that bit of char -- it gives them an authentic flavor! The recipe is quite easy, particularly as it calls for using a boxed brownie mix, but it would be just as easy to use a scratch brownie recipe. My main piece of advice is to watch the pan when you put it in under the broiler to toast the marshmallows, because it happens really quickly! If you have a kitchen torch (like the sort you'd use for creme brulee), it might be safer to use it for this step.

Okay, the work inbox beckons. Stay warm and catch you back here tomorrow!