A frosty good morning to you! I am posting a little later than usual today because I lucked into a last-minute dentist appointment first thing this morning. The last time I had a cleaning was sometime in fall 2019 (I was due for my next one just when things shut down last March), and the soonest I was able to schedule was May, but they told me they'd call if they had an earlier cancellation and it worked out perfectly! Everything looked good and it was easy to get in and out, but it also meant I was a bit rushed this morning (how easily I have settled into the more relaxed routine of working from home!).

It's Wednesday, so it's time to check in with Kat and the Unravelers on my knitting and reading.

Now that the crochet blanket is done, I've turned to my next WIP, and that happens to be Rainbow's Little Boxy (Ravelry link) sweater. Because I've been focusing on it, I now have about 7.5 inches of body done, and I think I need to get to 13 inches before I separate for the front and back. 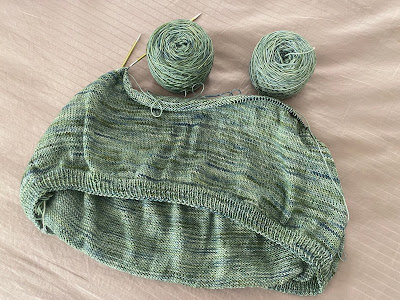 The yarn I'm using for this is hand dyed (it's from Ex Libris Fibers) and I think you can tell that one of the two skeins I'm using right now is lighter than the other, so naturally I am alternating skein. There's a third skein in my project bag, and I'll work in all three at some point so that the colors are evenly distributed.

Reading the past week has been mostly good. I finished three books.

While I was between library holds, I decided to read something that was already in my Kindle account. Opium and Absinthe was an Amazon First Reads freebie from sometime last year, and it sounded like it would be right up my alley -- historical fiction with a female main character trying to solve a mystery. Unfortunately, it was a major disappointment. The author spent too much time describing the setting in an effort to make it convincing but didn't take the same care with her characters; they sounded like they were from the 21st century and doing an Gilded Age cosplay. I gave the book 2 stars, but really only because the author managed to do a decent job of keeping the ending a surprise.

If you've been a parent or caretaker to a small child at some point in your life, then you'll likely easily recognize the title of this biography, In the Great Green Room, as the opening lines of its subject's most favorite work. I knew nothing about the life of Margaret Wise Brown, but it turns out that she had a truly fascinating life! She was born in 1910 and died tragically early in 1952, but in her short life she was amazingly prolific as a writer and editor of children's literature -- and her personal life was as colorful as her professional life. My appreciation for her work has grown now that I know more about her (for instance, that Goodnight, Moon was heavily influenced by the style of Gertrude Stein!). I got this as an audiobook from the library, and it kept me company on my walks for several days. I gave it 4 stars.

Speaking of stars, my most recent finish, just yesterday afternoon, is Emma Donoghue's The Pull of the Stars. This book is set in Ireland during the 1918 flu pandemic, but the pandemic itself is almost secondary here. The book is set over a few days and follows nurse Julia Power as she cares for a small group of patients in the hospital who are in the Maternity/Fever ward (that is, they are maternity patients also suffering from the potentially deadly flu). The virus has left the hospital so short-staffed that Julia is left to care for her patients virtually single-handedly, and these few days are filled with life and death and everything in between. I truly loved this book. It's a fairly quick read (less than 300 pages and very fast moving), but it's beautifully written and so moving. 5 stars for this one!

I've got about three weeks until my next library hold comes up (maybe less), so today I get to look at what books I already have and decide what to read next. I hope you're keeping warm and that your knitting and reading are keeping you good company!