What Was the Big Deal?

Part of the reason I have a fair amount of older fiber from Southern Cross Fibre in my stash is that in my early days in the club, the shipments felt so precious and I was afraid to ruin them (in those days, you had to wait for a spot in the club to open, and I'd been on the wait list for several years before I got my spot). I've gotten over that, though; I have enough spinning experience by now that it'd be hard to me to actually ruin any fiber, so really my only trepidation is that maybe I might regret how I've spun a particular batch of fiber and wish I'd spun it another way.

I really did not have any concerns about this spin, though. Once I decided how to spin it, it was really only a matter of days before I had a finished skein. 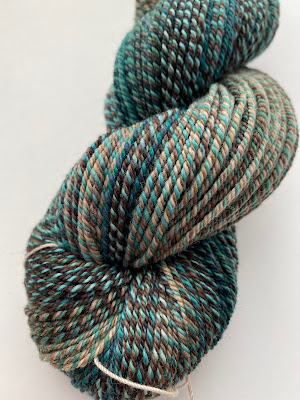 This yarn turned out pretty much just how I wanted it to, and it should create some subtle striping when it's knit up. It turned out roughly DK weight and approximately 213 yards. Being that's it's 100% Merino, I thought it might poof up a bit more in the finishing, but it really didn't. The colors are a bit more accurate in this photo: 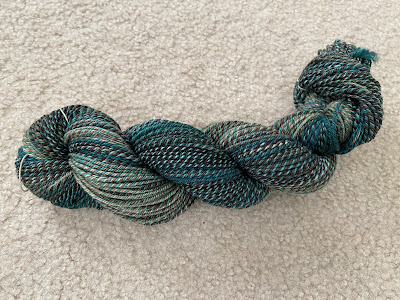 Just as I was finishing this skein, my newest club shipment arrived. This is actually December's colorway, but given David's dyeing schedule, his taking a break to visit family, and the increased shipping times, it only just arrived this past week. This colorway is called Weathered, and it's on a particularly luscious base of 50% South African Superfine/50% mulberry silk. Let me tell you, this is really nice to pet! 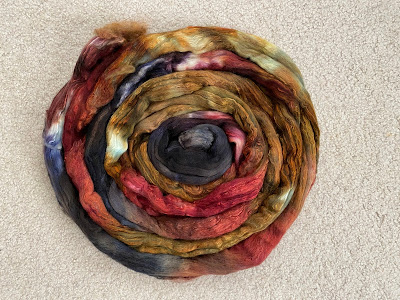 I am really committed to working through the older fiber, though, so I pulled out what is now my oldest unspun SCF stash, Shetland from July 2016 in the colorway Organic Greens. 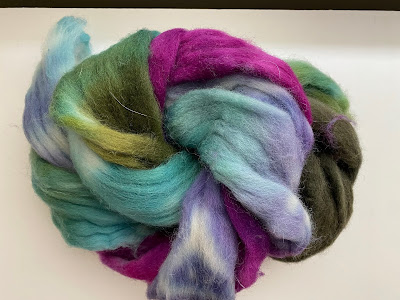