We are officially a week in on this new year, and my view out back is drastically different from last week. This is what we woke up to this morning: 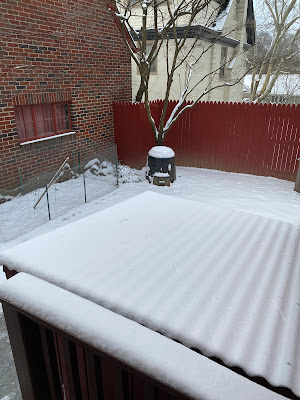 That flat surface you see is the roof of the little shed we had built this summer to hold our garbage and recycling cans. I'd say we got maybe an inch and a half of snow, not terribly much compared to other parts of the Northeast, but it's bitterly cold outside. I'll be bundling up in a winter coat and boots this morning for my walk instead of my usual activewear jacket and sneakers.

Yesterday I finished up a little project that I'd started last month. It was something I cast on mainly to have something to do with my hands during meetings, so I never even mentioned it on the blog. But now I have a new way to keep my ears warm on those rare days when it's cold enough to want them covered but a bit too warm for a hat:

Sorry for the blurriness of the photo, but the coffee hasn't fully kicked in yet. I used up some Fibernymph Dye Works leftovers from a pair of socks I knit Rainbow a couple years ago and had just enough -- maybe a yard leftover. What's a little hard to see in this photo is that the fabric is doubled; I knit it as a long tube. I still have some adjustments to make (like I added a twist that I don't think is needed), but it's certainly functional. Rainbow has asked for one, so I guess I'm knitting another.

Speaking of Rainbow, it's going to be a big year for her. If you can believe it, she will have her bat mitzvah this year, just a couple of days after her 13th birthday. Last night we had our first meeting with the rabbi to talk about this major right of passage. And tomorrow I will be handing off two skeins of handspun yarn to a friend who is going to weave a piece of fabric for her tallit. You may recall that last year, I spun up the two skeins that I thought would be used only for Rainbow to tell me (rather late in the game) that one of them was too colorful. Thankfully she found something else already in my stash that would work so I didn't have to rush to spin a replacement, and while I'm a bit surprised by her choices, I'm happy that she is satisfied. 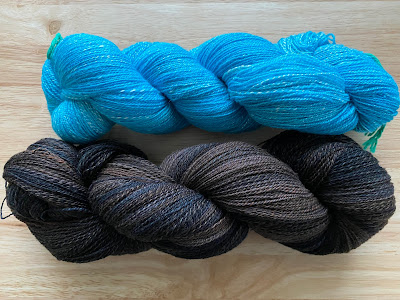 The darker skein, which will be used for the warp, is Polwarth from the now-defunct Crown Mountain Farms. The bright blue, which will be the weft, was spun from Merino dyed by what was then called Scarlet Fleece and now seems to be known as Sweet Tree Hill Farm that I hand-carded with some undyed silk sliver. The silk is pretty subtle and a bit slubby, so I think it will add just a hint of shine and some texture.

I hope the first week of 2022 has treated you gently and that you're staying warm in wool if you've got cold like us. Have a great weekend!