Too Much Drama for One Weekend

I had hoped that this past weekend would be a relaxing one. We didn't have much on the calendar, and the weather was supposed to be very cold on Saturday and rainy on Sunday, so it looked like a good weekend for staying in.

And then all hell broke loose.

Rainbow was online last week for the first week back at school. Her school did this last year as well, and I thought it was a smart way to allow those students who might have traveled to isolate at home for a bit without having to miss any school. They asked everyone to get a COVID test prior to returning in person, just to be safe. So I took her to get a PCR test on Thursday afternoon, and I got one as well, as it was easy and I figured it couldn't hurt. The wait for results was longer than the last time we went, but I got my negative result around noon on Saturday, just before we left for a field trip at the museum with her Girl Scout troop. Rainbow had had some allergy-like congestion but felt fine otherwise, so we just assumed she'd get a negative result as well. I think you can see where this is going. Saturday night, as I was keeping her company while she was in the shower, her positive result came in.

Before anyone gets worried, she is fine, though clearly upset. We figure she had to have caught it when we were coming home from Florida, because before and after that, she hasn't been around anyone but immediate family. I am sharing this news, with her permission, because I want you all to get a sense of just how contagious this new variant is. As you know, she was only recently fully vaccinated, having gotten her second shot just about a month ago. When we traveled, she was double-masked with a surgical mask and a cloth mask (because the N95 masks we had on hand were too big on her). I've ordered some child-sized N95 masks, but they're going to take some time to come in. This new variant, though, is so contagious that I'm not sure even the best mask can stop it. So be careful out there!

As Elizabeth Zimmermann so wisely advised, "Knit on, with confidence and hope, through all crises." And that's what I've continued to do (though I've been spinning as well as knitting). I am getting very close to finishing up my combo spin singles; I'm convinced that these last few bundles of fiber are taking the longest of any part of this project to finish! There are three more to spin after this one. 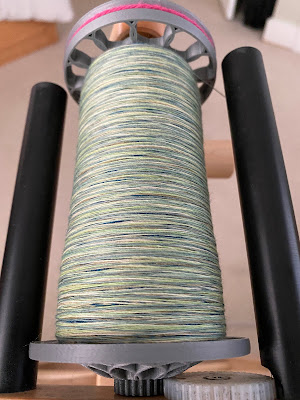 I've also put in quite a few rounds on my May(be) Queen, and I'm not that far off from the end of the body. 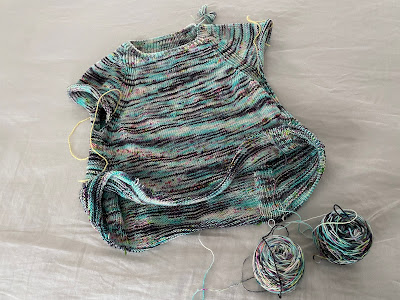 I know the needles flipping up is making it hard to see exactly how the fabric is laying, but the back of the sweater is in fact longer than the front thanks to a series of short rows that are worked every now and then along with the fake increases and actual increases and decreases to shape the side panels.

I hope that your weekend was much less dramatic than mine. Stay safe out there!