First, I want to thank all of you for the kind comments and good wishes for Rainbow. She was able to get back to school yesterday (double-masked!) and is feeling great, other than a little bit of lingering congestion that may or may not be related. I was feeling a little gross over the weekend, mainly with sinus issues, but I started using my nasal spray again and they've resolved, so who knows. I did go back and get another PCR test yesterday -- which turned into quite an adventure when my first swab decided to jump out of the vial and I had to redo it! -- and it's currently being processed, so I hope to have results later today. [Edit: Just got results -- negative!]  The Mister has felt fine the entire time, so he's either not been infected or been asymptomatic.

It is Wednesday today, which means it's time to link up with Kat and the Unravelers to talk about what's in progress and what I'm reading. I am still working on my sweaters (well, actively only on one sweater), but you know that old adage about how the cobbler's children have no shoes? This weekend Rainbow informed me that she has no mittens that fit her. So guess what I'm knitting? 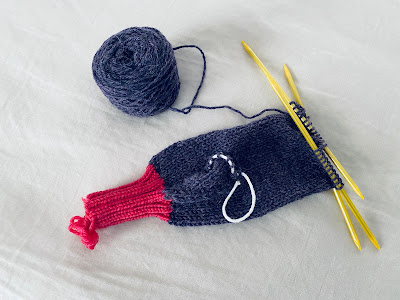 I'm using the Snow Day Mittens pattern (Ravelry link), which I've used many times before, but I've had to go up to the women's small size. The pink here is some Knit Picks Swish Worsted and the heathered  purple is a 50% wool/50% alpaca from a sweater I frogged. I knit all of the purple part you see here during last night's Read With Us Zoom session, just to give you an idea of how quickly these work up. I've got maybe another round or two to knit before I start the decreases.

High on my list of priorities today, however, is finishing up the singles of my combo spin, because this is all I have left to be spun: 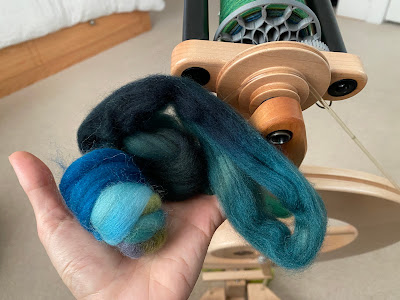 I am really excited to get to start plying and see what this mashup yarn looks like!

Reading has been challenging (in a good way) and fulfilling this past week. I finished two books:

I had heard about Eloquent Rage on a podcast and tagged it as to read in my library app several months ago, and I finally listened to it over the course of a few days. Cooper is a writer and a professor of women's and gender studies and Africana studies, and this book (which she reads herself) is a collection of essays about identity, racism, sexism, and feminism. She is brutally honest about how she views her role as a Black woman in a patriarchal country grounded in systemic racism, and her writing is incredibly powerful. I have a feeling I'm going to need to read this again, in print, because so much of it passed by quickly on audio and I have so many things I want to highlight and take notes on. I gave it 4 stars.

I know several of you have already read and raved about How the Word Is Passed, and someone (forgive me for forgetting who!) mentioned right before the end of the year that the Kindle version was on sale, so I bought it immediately. I took my time with this one and read it slowly; Smith is a poet, which you can tell from his prose, and his writing almost begs to be read at a slower pace. In this nonfiction book, the author takes the reader along to visit a number of historical locations that have strong ties to slavery and reflects on how their legacy can be felt today, both in our society in general and in his own life as a Black man descended from enslaved people. Given his background, you'd expect to get a particular viewpoint, but I really felt that he went out of his way to try to get honest opinions and responses from the people he met during his travels, including white descendants of those who fought for the Confederacy. I had a lot of highlights in this book, but the most powerful one, I think, was the very last one:

"The history of slavery is the history of the United States. It was not peripheral to our founding;
it was central to it. It is not irrelevant to our contemporary society; it created it.
This history is in our soil, it is in our policies, and it must, too, be in our memories."

I gave this book 4 stars.

I'm currently reading three books -- one on paper, one on audio, and one on ebook. The paper book is Braiding Sweetgrass, which is likely to be a long-term read for me. I am listening to Magpie Murders on my walks this week. It's been on my radar for a while, and when Katie mentioned how much she enjoyed it on Monday and it was available with no wait from the library, it seemed like kismet. I'm roughly a third of the way through it and am enjoying it immensely. Finally, after last night's Zoom discussion, I was inspired to read another Lauren Groff. Fates and Furies was mentioned as a favorite a couple of times, and I've been meaning to read it, so I finally borrowed it from the library and started it right before bed.

What are you working on and reading this week?