Clearly I needed a long holiday weekend to get my knitting mojo back in full force, because I was a crazy knitting machine this weekend -- and I say that both in terms of actually finishing things and casting them on.

Last Wednesday, I got out of work early for the holiday, so I took myself straight home, got into my PJ's, and sat down with the handspun hat I'd started for my future sister-in-law the previous weekend. I had hoped to have finished it the night before but ran out of time before bed, so there were really only a handful of decrease rounds left to do on the crown. It was finished and blocking in no time (and, thanks to cold weather and warm radiators, it was dry the next day). I did hope to get the Mister to snap a picture of me modeling it over the weekend, but in all our running around it just slipped my mind, so please excuse this flat photo of it freshly dried. 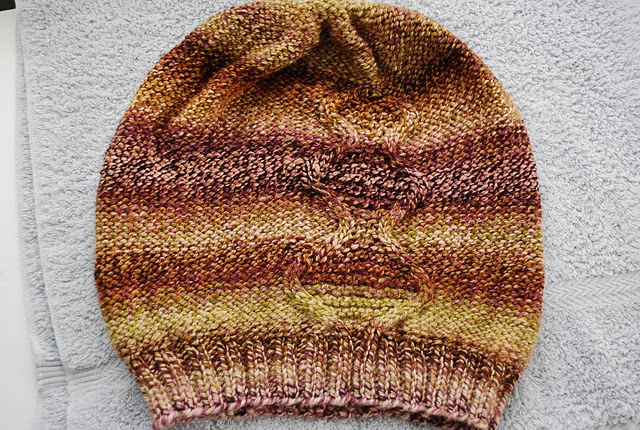 I pretty much made up the pattern as I went along. The main part of the body is reverse stockinette, but the feature is that wavy cabled thingy (yes, that's a technical term) with garter stitch inside. When worn, the hat is slouchy and really cute -- exactly my future sister-in-law's style -- though I know it doesn't look like much just sitting here. I made some rough notes of what I did to knit it, so perhaps sometime I'll sit down with a solid color yarn and knit it again.

The other part of my gift for FSIL is a pair of Metropolis Mitts, also being knit in handspun, that I'm knitting as part of the Gift-a-long. I finished up the first one shortly after wrapping up the hat. I know this photo is a little blurry, but it gives you the idea (and given how much natural sunlight is in short supply these days, I doubt I'd get a better one). 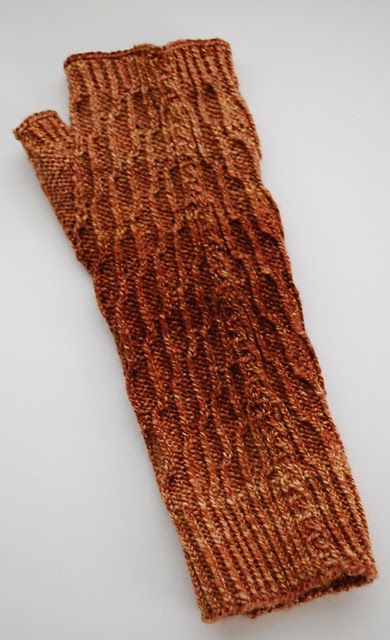 The second mitt has been started and is moving along at a fairly brisk pace. With any luck, the pair will be finished by the weekend.

On Thanksgiving Day, I pulled out a gorgeous (and impossible to photograph) skein of madelinetosh pashmina that Stefanie at Stitchcraft sent me to review. The colorway is called Midnight Pass, and it's exclusive to the shop A Good Yarn in Sarasota, Fla. With the fiber content of this yarn, I knew that it had to be made into a cowl, so I sketched a little lace pattern and cast on. Once I'd knit an inch or two, I realized that the needle I'd picked (32" circular) was just too short for a decently sized cowl, so on Friday I ripped out what I'd done and started over with a 40" circ. I haven't make much headway since then, but that's mainly because I've been so focused on other things the past few days -- this one will definitely get the attention it deserves in the near future. At present, it looks like this: 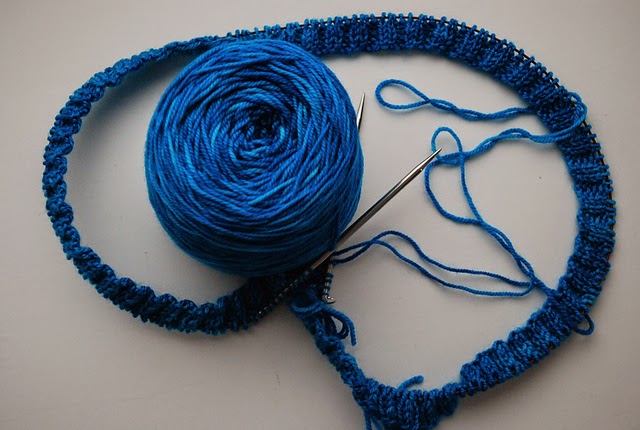 While it isn't much actual knitting, I can tell you that I'm already completely enamored with the knitting experience. This yarn is soft and silky and smooth, and it knits almost effortlessly. I expect that it will have wonderful drape as well thanks to the silk content, and I wouldn't be surprised if it develops a slight halo from the cashmere. Stay tuned; I'll keep you updated.

Finally, there was the neon. On Black Friday, the Mister and I went in search of some cold-weather running gear for me (I haven't been doing much running since the weather started changing because most of my running clothes are meant for warm weather). I was a bit appalled at how pricey even a simple beanie was, especially considering that all the ones I looked at were synthetic. I knew I could do better, so while I was knitting at my LYS on Saturday, I picked up a couple of skeins of Uptown Worsted in a shocking shade called Bright Salmon -- a color that will ensure everyone sees me when I run. I cast on for a simple hat on Saturday evening and was done by last night. This was another pattern I made up as I went along, and I'm really pleased with how it came together.


I used less than a skein of the yarn, but the extra means that I have plenty should I want to make a giant pompom or a matching headband for those days when it's just chilly enough to make my ears cold.

Now, I'm sure you're wondering why I selected a 100% acrylic yarn when you know I really like natural fibers. For one thing, I knew this yarn came in really bright neons. But I'm also expecting to sweat a lot in this hat and wanted to be able to throw it in the wash with the rest of my workout clothes. Yes, there are superwash wools, but sometimes they're only superwash to a point. So I figured I'd try this out (and at $5 per skein, it certainly didn't break the bank).

There are other things on the needles and one big project that's finished that I still have to tell you about, but I think I've done enough rambling for one day. I promise the next post will feature at least one finished project!
Posted by Sarah at 8:37 PM