Vacation is almost here, but there's still one more day of school and work and a heck of a lot of packing to do. Usually when I pack for a vacation, the clothes are the most difficult part, but this time it's the knitting. But more on that in a minute. First, I have an FO! 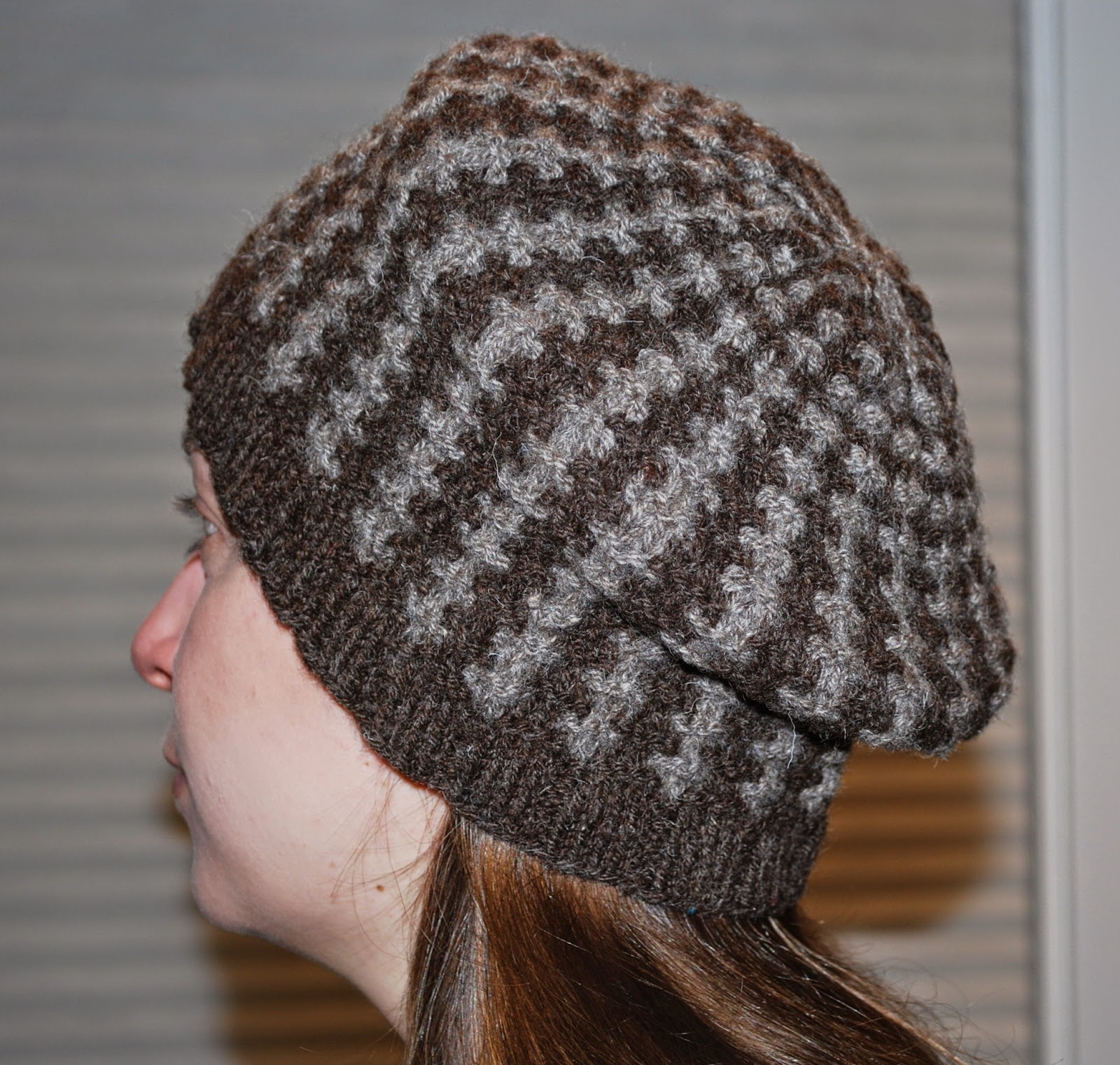 This hat was such fun to knit. Amy is a friend of mine, and I'd seen her working on the sample at our knit night and admired it, so I was thrilled when she released the pattern. The stitch pattern is a lot less complex than it might look -- you only work with one color at a time, changing colors every two rounds. It does make for a very dense fabric, however, which is not necessarily a bad thing in the case of a winter hat, but combined with my handspun, which was already pretty dense, you can understand why it took several days for the finished hat to dry when I blocked it, despite spending two days sitting atop the radiator.

One day I'd like to knit this again in a commercial yarn, and when I do, I think I'll go down a needle size or two for the brim. The hat was designed to be loose around the brim (Amy designed it for her hair stylist sister-in-law, so it's meant to be able to be worn without messing up one's hairstyle), but I think that I'd like a slightly snugger fit. I believe that Amy is also working on matching mittens, so those may be in my future as well!

Now, back to the packing. It's been hard not to pack everything, and I'm probably packing more yarn than I'll actually use, but I'd rather have to bring back some yarn untouched than run out part of the way through the trip. (There is supposedly a yarn store somewhere in the area, but I would doubt that a Florida yarn store would carry much in the way of yarn I'd actually want to knit, given the climate.)

Here is what I have so far: two skeins of worsted weight (Malabrigo Worsted and Madelinetosh Vintage) for hats, both pattern samples; two skeins of Mountain Meadow Wool Cody for another design; a skein of handspun Polwarth/silk for a crocheted (yes, you read that right!) cowl for me; and a set of Fibernymph Dye Works Inversibles for another pair of socks (the Electric Avenue socks that are already in progress will be coming with me on the plane).

As the sock yarn is going to be out and about with me (for work in the car or at restaurants), I don't think it really counts. The hats will probably get knit up in a day or two, so that leaves really only two projects, neither of which is all that huge. So I think I might throw in a Miss Babs Color Affection kit that I bought at Maryland Sheep and Wool several years ago (I think 2012). I figure that that can be my last-resort project, and it's not one I'd have to finish while we're still away. The yarn is fingering, too, which means it'll be easy to squish into my suitcase.

Tonight I'm going to try to gather all the knitting stuff (including patterns) in one place and begin laying out my clothes. I don't want to be in a last-minute panic to pack -- vacation is supposed to be relaxing, after all!
Posted by Sarah at 8:33 PM