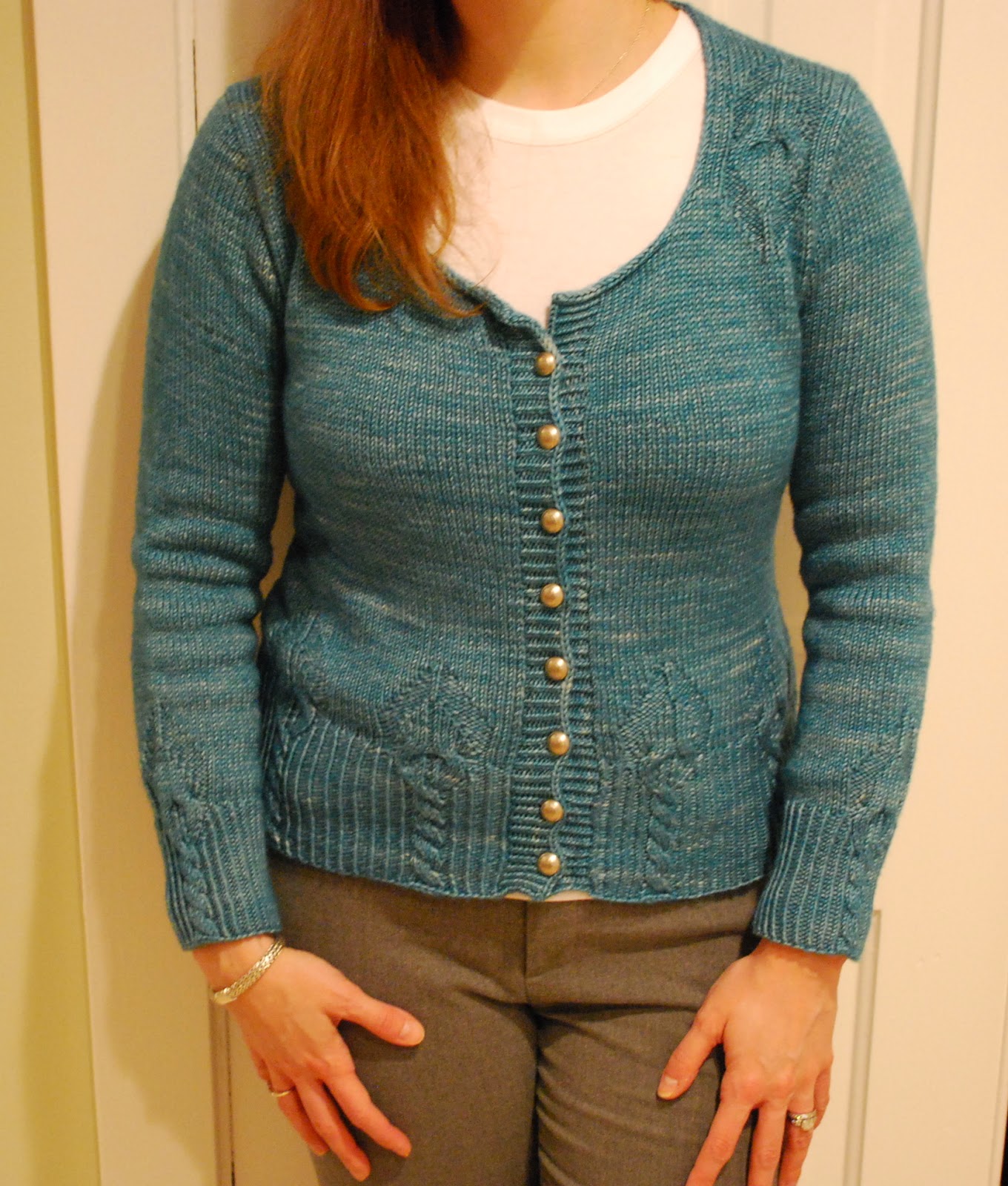 I'm not sure what it was about this sweater. I love how it turned out, I was really intrigued by the construction, and I adored the yarn, but for some reason it look me more than seven months to finish it. In truth, it probably did not take me any longer than normal if I could total up the actual knitting time, but this sweater suffered a lot in terms of being shoved to the bottom of the knitting bag. I suppose that I should try not to start a sweater just as the weather is warming up because I tend to completely lose my motivation to knit it. And then there's the twisted ribbing on the bottom of the body that nearly did me in. But in spite of all this, I'm very pleased with how it turned out -- I even wore it to Thanksgiving dinner, and I wore it again today! 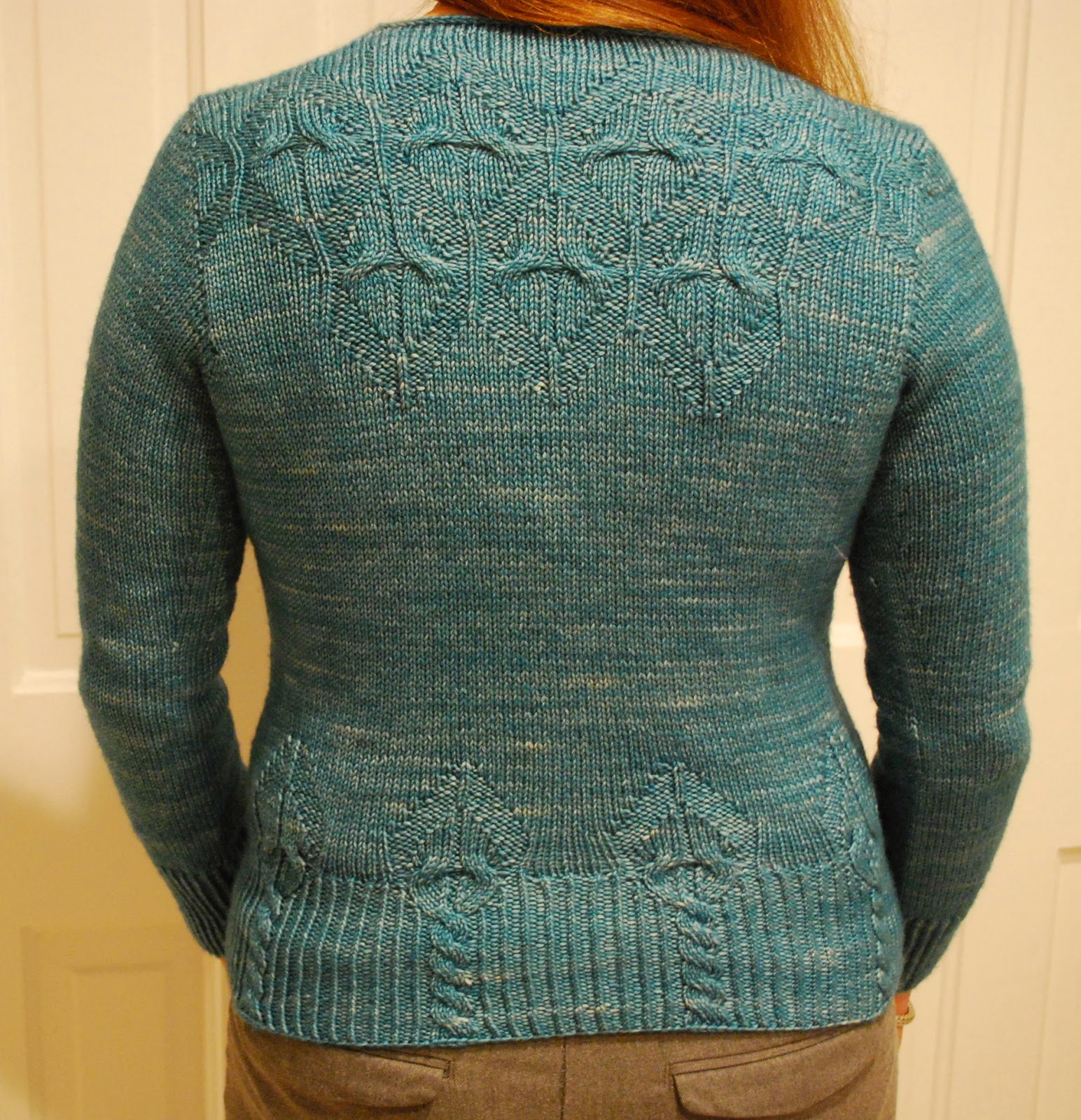 Aside from the design, which was what originally drew me to this pattern, its construction was a big part of the appeal. Only once before have I knit a sweater in the way this one was knit, and it was years ago (and a bit of a flop, if I remember correctly). The sweater starts with a provisional cast on that corresponds roughly to the top of the shoulders. You work down the back to about where the underarm would be attached and then put those stitches on a holder. Then you do the same with each front section. Then the fronts and back are joined and you work in one piece, flat, the rest of the way down the body (and that's where I got tripped up by the twisted ribbing -- I do not care for purling through the back leg). 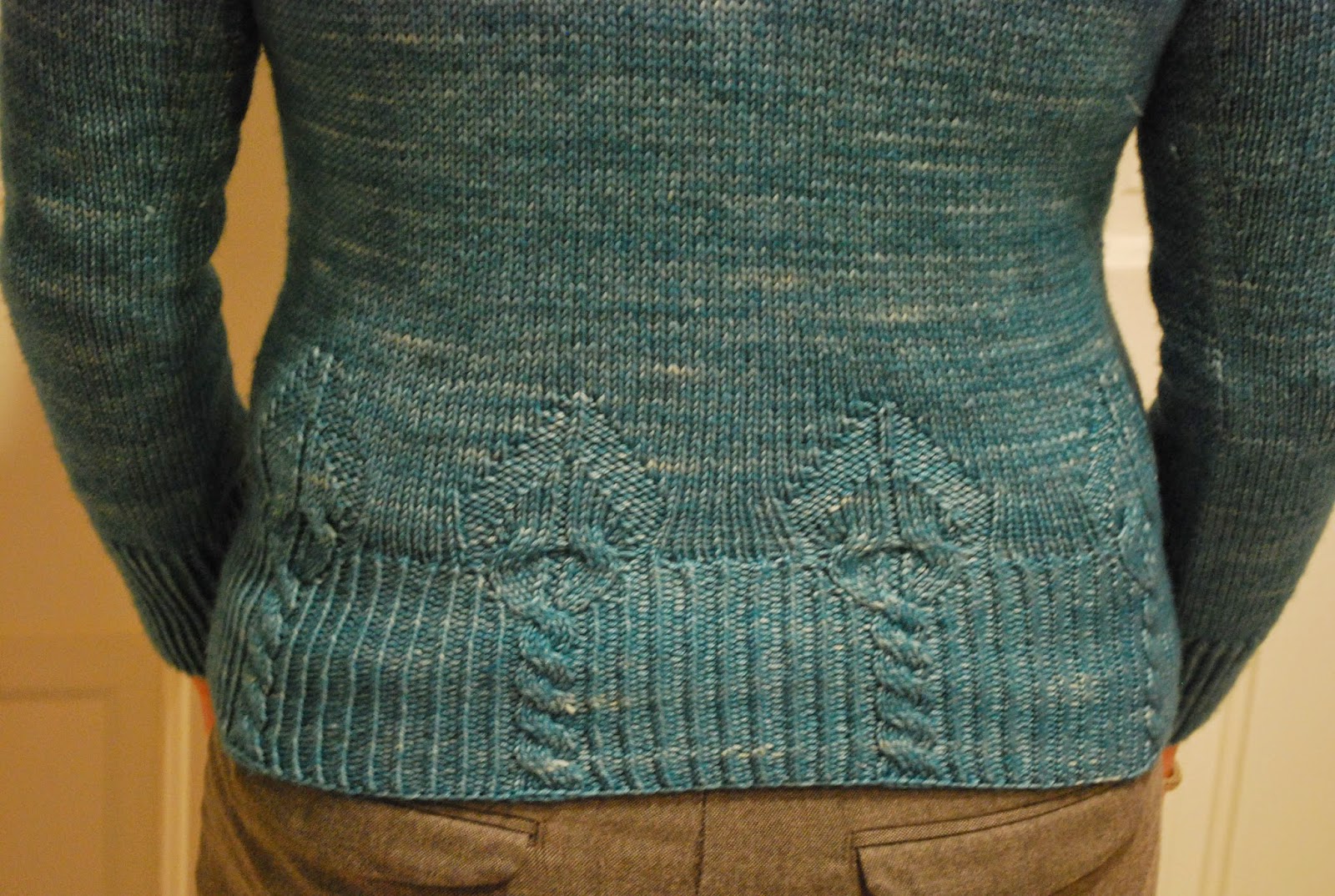 At that point, you pick up stitches all the way around the armscye and use short rows to shape the sleeve cap. I had to wing this a bit because I needed to pick up more stitches than specified, but luckily it worked out (though it took several attempts due to some stupid mistakes I made). I worked some extra decreases on the sleeves to get back to the target number for the cuff, which actually worked out well because I lengthened the sleeves anyway to make them full length.

I found the buttons at my LYS, and I think they're absolutely perfect. Because the button bands on this sweater were worked with a smaller needle, the buttonholes are pretty small, so these are a snug fit (which, to me, is preferable to a gaping buttonhole).

I cannot say enough nice things about the yarn. I've used it once before and knew that it would block out well (and thank goodness for that, because the sweater did not reach all the way around to button before blocking!). I did not alternate skeins except when I had to transition from one skein to the next as the first ran out, and honestly I cannot tell where I did it. What's more, this yarn gets really, really soft and drapey when you block it, so this is now a really cozy sweater. Seriously, I have to stop myself from petting it all the time. Some final thoughts about the pattern: I did have some issues with it, which really have nothing to do with the quality of it -- these are just my own personal things and shouldn't necessarily keep you from buying the pattern if you like the sweater. First, it's a bit long -- somewhere in the neighborhood of a dozen pages. Despite having various iDevices and apps that would help me manage such a pattern better, I still like to print out a hard copy of my pattens so I can highlight and take notes and cross things out. That meant there was a lot of shuffling back and forth between pages, and the pattern got a bit disheveled after all those months of taking it out and shoving it back in my knitting bag. There was also the issue of a line on a chart that was never needed and never explained. It didn't really have an effect on my knitting, but it was a curiosity that continued to confound me.

Would I knit this pattern again? Hmm, maybe not, but then again I don't think I've ever knit a sweater pattern more than once when I didn't have a compelling need to. I did enjoy the seamless top-down set-in sleeve, and I would definitely do it again. Overall, I think this project goes in the win pile -- but I think I also need something a little more intuitive for my next sweater.
Posted by Sarah at 9:42 PM