My two current WIPs are both secret design projects, which makes for some rather boring blog fodder. It also makes for somewhat monotonous knitting time, and this past weekend, I decided I needed a little palate cleanser with something quick and easy.

Rainbow has started a small collection of pins, but she hasn't found a good place to put them or store them. Her backpack isn't the best place, as she's not exactly careful with it and the likelihood of anything pinned to it getting lost is high. So I decided to knit up a felted pennant for her that she can put her pins on and hang in her room. The idea was to create something kind of like this: 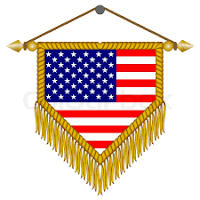 We dug through my non-superwash wool stash and found a skein of Cascade 220 in a bright purple and nearly complete skein of Knit Picks Wool of the Andes in a muted blue. I pulled out some large needles and was off to the races!

Because I had 220 yards of the Cascade and maybe 100 yards of the WotA, I cast on with just the purple and worked maybe a dozen rows in stockinette, keeping the five stitches on each end in garter. Then I joined the cast-on edge to the live stitches to create a little channel/tube for a dowel to go through. I then joined in the blue and held both strands together for the rest of the piece, working straight for a bit and then decreasing every right-side row at each end to form the point. Here's what it looked like right after I finished (in the late afternoon on Sunday, hence the bad lighting): 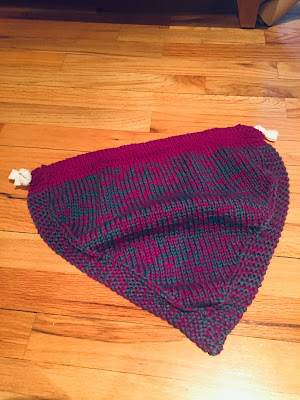 The white you see poking out at the ends is a strip of a piece of rag that I put through the channel to keep the sides from felting together.

We got this thing good and wet (along with our collection of dryer balls, which were starting to fall apart a bit) and then ran them through several cycles in the dryer. (As an aside, I can tell you that my dryer is plenty good at felting, and I haven't even bothered trying to felt in my front-loader since I discovered I could do it in the dryer.) After about three short cycles, we ended up with this: 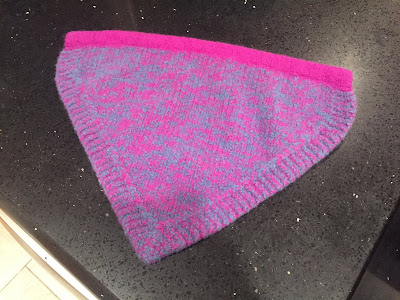 It's not quite that glaringly bright, but again, winter light. It's now done except for getting a dowel to run through the top and some pretty ribbon (or yarn?) to tie it up. While it's smaller than it was before felting, it's probably a bit larger than it needed to be, but I'd say it's not bad for having improvised the whole thing. Overall, I used a bit more than 220 yards of yarn from my stash, and knitting with size 10 and 10.5 needles was a fun change from my usual 0's!
Posted by Sarah at 1:28 PM