I know that the start of a new year is when many knitters take stock of their works in progress and determine whether to finish or frog them. It's rare for me to let a WIP linger too long, so I've started 2019 with only two projects on the needles. The first is the pair of socks I started on the way to the airport to catch our flight to Florida, so while they haven't gotten a ton of attention recently, they're still a relatively new WIP. 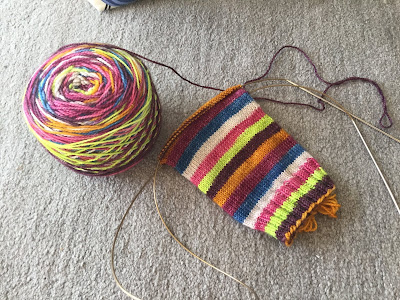 This is the special Dyer's Favorites 2018 colorway from Fibernymph Dye Works that Lisa sent me as a holiday gift. The seven colors that form the stripes are the colors she used most often in 2018, and I just love it. There's also a mini contrast skein (white with speckles of the seven colors) that I may use for the heel; I'm still deciding. I'm just knitting a basic stockinette sock with this yarn, so I know they'll be done before too long.

The other WIP is a bit older. It's my Floozy cardigan, which I started on the drive on the way to Rhinebeck back in October. I brought it with me to Florida because I had grand delusions about getting a ton of knitting done, but the reality is that it's fingering weight yarn on size 2/2.75 mm needles, so even with a lot of knitting time, it's not going to be a fast knit. But I have put in some time on it, and I'm hopeful that before we leave, I'll have finished all the yoke colorwork and separated the body and sleeve stitches. 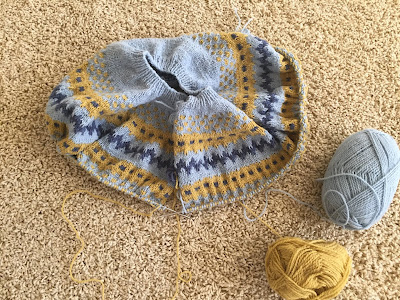 Meanwhile, I have been reading what should be my first finished book of the year (I want to finish it before we leave, as it's my parents' book and I don't want to take it home). It's called Beartown, and it's by Fredrik Backman, the man who wrote A Man Called Ove. This one is about a down-on-its-luck hockey town, and so far I'm enjoying it, though perhaps not as much as the other two Backman books I've read. Still, it's enjoyable to be able to spend more time reading than I usually get, and if I finish before we leave on Saturday, I will have read four books in our two weeks away.
Posted by Sarah at 3:17 PM