It has been a long week that seems to be dragging by, and I'm very much looking forward to the long weekend (all of us are off on Monday for Martin Luther King Jr. Day).

I've continued to spend a little time here and a little time there on my WIPs. My socks are moving right along, thanks to some bonus daytime knitting. I usually only work on them during my lunch break, but thanks to a webinar and a conference call this week, I was able to sneak in some extra time (my door is closed and I'm paying attention, and no one is the wiser). 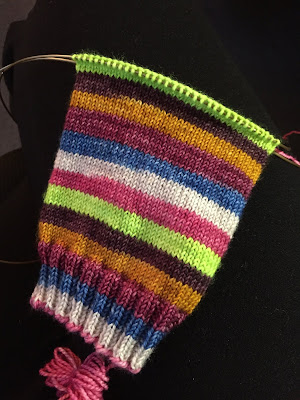 I also have a new WIP, a hat I cast on Tuesday night with the hopes of replacing the brioche hat I've been wearing this winter. It's a hat I like but that has turned out to not be too warm when it's been really cold here, so I decided something with stranded colorwork would be a better option. I am knitting my friend Fay (aka UkeeKnits)'s Alder pattern using two skeins of Knit Picks Swish Worsted, one skein leftover from the Mister's sweater and one that I ordered for making charity hats. 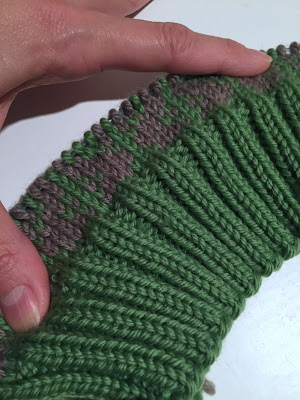 The photo isn't great (thanks, gloomy weather!), but I think it's good enough to see that the contrast isn't great. If I finish and I'm not wild about it, then this'll go in the charity pile and I'll knit something else for me.

My third WIP of the week (if you can call it that) has been my reading. Toward the beginning of the week, I finished up The Ragged Edge of Night, which I'd bought on a whim thanks to an Amazon recommendation. I actually really enjoyed it. It's a World War II story from a perspective I haven't read very often, that of a German citizen who opposes Hitler. While the writing is beautiful, I thought the story was a little far-fetched until I read the author's note at the end and found out that it is largely a true story. I ended up giving the book five stars.

Now I've moved onto some more difficult, thoughtful reading, in the form of Michael Eric Dyson's What Truth Sounds Like: Robert F. Kennedy, James Baldwin, and Our Unfinished Conversation About Race in America. I saw that Kat had recommended it in the wake about the discussion of racism within the fiber arts community, and my library hold on it came up surprisingly quickly. I'm hoping to finish it later today, though I expect it will take me longer to fully digest what I've read. I'll admit that there are many sections in this book where I haven't felt smart enough to fully understand what Dyson is saying, but I feel like I've expanded my understanding and gain some much-needed perspective.

We're expecting a big winter storm to hit us this weekend, so I plan to curl up with my reading, my knitting, and my spinning and relax. If you're in the storm's path as well, stay warm and stay safe!
Posted by Sarah at 9:33 AM