While crafting mojo is high these days, project monogamy is not. I've been skipping from one WIP to another lately -- not so much because I'm bored but because I like the variety.

Over the weekend, it was all about small circumference knitting. First, because there was such a great response to the first one on Instagram, I knit up my second fingerless mitt to finish the pair. 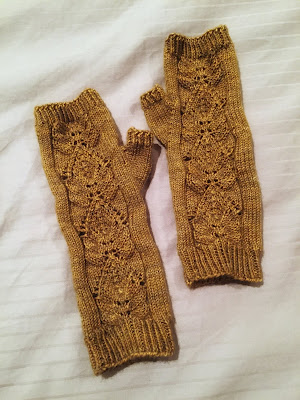 Obviously they are not yet blocked, but that will happen this evening, and then a proper photo shoot (in real daylight) needs to happen. These are my own design and are already with my tech editor, who has promised to get the pattern back to me ASAP as she wants to knit a pair herself! I don't think I mentioned when I discussed my intentions for the year that my goal for my designing was to reach 100 published patterns by year's end. I'm currently at 87, so that means 13 new designs or roughly one a month. If the timing works out, these mitts will be my release for January.

On Saturday, we had the great luck/good fortune to be able to go see a performance of Hamilton here in Pittsburgh. As excited as I was to see the show, I know that I am not able to sit through anything without something to do with my hands (without knitting, that inevitably means I end up biting my nails), so I took a sock in progress with me. This sock is the one I started on the way to Florida back at the end of December; I hadn't touched it since finishing the gusset decreases on the flight home more than a week ago. It turned out to be the perfect project to bring along, and by the end of the show, I was only half an inch shy of being able to start the toe. I finished up the rest of it during my lunch break yesterday (so please excuse the industrial carpet backdrop): 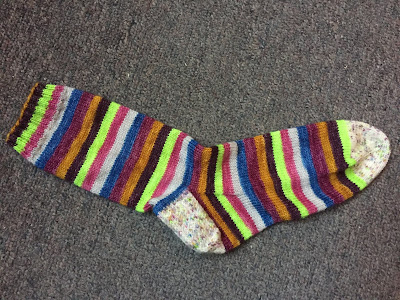 The yarn is Fibernymph Dye Works Bounce in the colorway Dyer's Favorites 2018; the stripes are the colors Lisa used most often in her dyeing last year. The skein came with a mini skein of white with speckles of the same colors used in the stripes, and I opted to use it for the heel and toe. The second sock was cast on this morning.

Finally, I'm still slogging away at my Floozy, and I've come to accept that it's just going to be a long-term WIP that will get finished someday. While the knitting right now isn't terribly exciting, it is easy and mindless, so I put in a few (long) rows last night while reading. 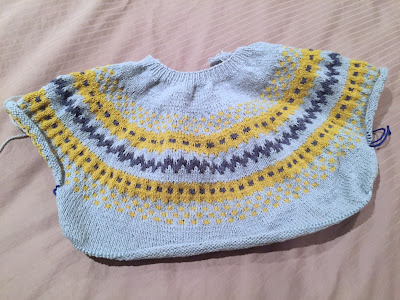 I've still got quite a long way to go on the body, but that's okay. It will get done when it gets done, even if it's the middle of the summer.
Posted by Sarah at 9:31 AM