There's an oft-quoted statement by Elizabeth Zimmermann that I thought about quite a lot this weekend:


"Knit on, with confidence and hope, though all crises."

My parents, brother, and I traveled to Chicago this weekend to say good-bye to my uncle, who passed away last week after dealing with health issues for many years. As I told many people, it was not entirely unexpected given his recent struggles, but even knowing this kind of thing is coming doesn't make it any less sad. In spite of the sadness, it was good to be able to be with that side of the family, as we very rarely see them (the last time we saw them was something like three and a half years ago). I was also very honored that my aunt asked me (along with my brother and my uncle's other niece and nephews) to be a pallbearer. I have never done that before, and it meant a lot to me to be able to help lay my uncle to rest.

Part of the Jewish custom when someone dies is the practice of sitting shiva (the word comes from sheva, the Hebrew word for "seven"; the practice lasts for seven days after the burial), in which the family members in mourning stay at home and receive guests. You're not supposed to do anything, including entertaining those guests, during this period; you basically sit around, eat all the food that people bring, and pray. That meant that we had a lot of time to talk and catch up with all the family members. We also spent time with my cousins' children, including my one cousin's younger daughter, who we hadn't met before (she was pregnant the last time we were in Chicago). The two little girls, who are 6 and 3, are absolutely adorable and too young to understand what was happening, so they did a lot to lighten the mood. I know that we are all very glad that we have two happy occasions coming up in the next year or so to look forward to!

All of this time away meant quite a lot of knitting. We had more than eight hours in the car each way, and I'd already decided that I was dedicating that time to working on my Floozy. I was incredibly productive in that respect. When we left on Saturday morning, I had about six inches, perhaps a little more, knit on the body under the arm. By about two hours into the trip home yesterday, I was ready to start the ribbing at the bottom. I likely would have made decent progress on the ribbing, too, had I had the smaller needle I needed for it in my project bag (apparently I pulled it out at some point after doing the collar). So I left the needle in and the yarn attached and started the first sleeve (if you're wondering how this was possible, it's because I'm using a needle that's half a size larger for the sleeves because I know my gauge knitting in the round is going to be a bit tighter than my gauge knitting flat). 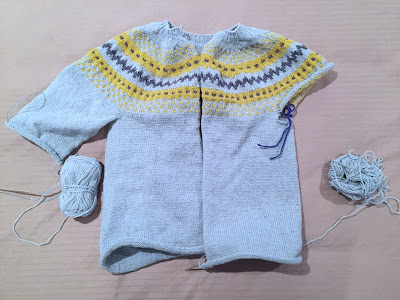 I panic-ordered two more skeins of the light blue yarn from the Woolly Thistle before I left, thinking I was going to run out, but now I'm not so sure. I was planning to knit the longer body option, but yesterday I measured the sweater I was wearing and realized that the shorter option would be plenty long. I still have two full skeins of yarn left, and it's starting to look like that will be enough. But the additional skeins are already on their way, and I'm sure they won't go to waste. I'm really enjoying this yarn and will be happy to use any extra for mittens or hats.

I took my socks along as well, for knitting while we were sitting at the house, and my first sock has gotten noticeably bigger.

I was planning to knit these socks until I ran our of yarn. I'm already at about 7 inches on the leg of the first one, and there's still a fair bit of yarn left. So it looks like I will be doing some calf increases soon and end up with some very tall socks!

Rainbow is headed to Florida for a week with my parents early tomorrow morning, so the Mister and I will have some very rare time to ourselves. I plan to continue to work on my Floozy as much as possible because not only do I really want to get it done, but I also have some serious baby knitting to do. We missed the gender reveal party for my brother- and sister-in-law on Saturday (though we FaceTime'd in for the reveal) and ... it's a boy! That limits the number of hand-me-downs from Rainbow we can pass along and means more knitting for me!
Posted by Sarah at 8:17 AM