As long as I'm trying to work from stash this year when it comes to knitting, I really should be doing the same thing when it comes to fiber. I have a somewhat embarrassing amount of fiber waiting to be spun, quite a lot of it from fiber clubs that I don't do a good job of keeping up with. When I went to pick out the next thing on my wheel, I decided to go with some Fibernymph Dye Works Falkland that was from a fiber club from 2017. The theme of the club was barberpoling, so each shipment came with two colorways with the idea of spinning them separately and then plying them together. I knew I wanted to spin the colors in this particular shipment separately and keep them that way so I could use them in a two-color shawl. I started spinning on Friday with the most gorgeous blue ever: 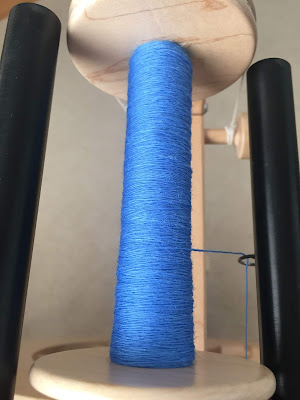 This part of the shipment is entirely that semisolid vibrant blue, but the other fiber is a gorgeously bright gradient. Here you can see the two of them together: 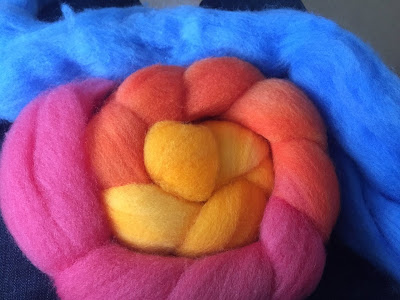 My plan is to chain ply my singles so that I can maintain that stunning pink/orange/gold gradient. I think the two skeins together will really be stunning.

When I finish up these two skeins, I'll have finally caught up on my FDW club fiber, but the club that's causing the most backlog in my stash is from Southern Cross Fibre. I get a shipment from David every month, and let's just say that I rarely spin what I get even though I love pretty much everything I've ever received. I thought that a good way to plow through some of that would be to do a combo spin for a sweater, so I went through my fiber stash and pulled out eight bags of fiber that I thought would go well together. 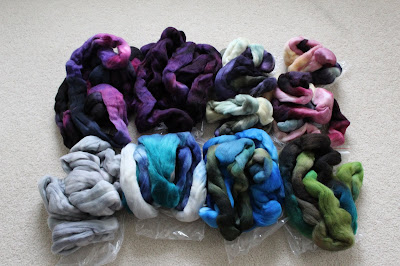 There are four bags of fiber here that are Bond, two that are Comeback wool, one that's Falkland, and one that's Falkland Merino, so they all feel very similar. There are a couple of shipments that might not fit as well -- the two on either end on the bottom row -- but I think that if I split up all the fiber pretty well so that no one colorway is really apparent in any given skein, it might be okay. I think the silver gray on the bottom left will be fine, but I might swap out the green/blue colorway on the bottom right to something that's more blue and less green, if I can find something that fits fiber-wise.

Regardless of my final choice, there's still the question of how to split up all the fiber. I have about 880 g (or roughly 31 oz.) of fiber here, so my initial thought was to split each shipment into eight strips and then allocate them more or less evenly so that each skein I finished would have bits of every colorway in it. The complication is that I'd ideally want to do a traditional three-ply yarn, and eight doesn't divide into three evenly, so there would have to be more splitting. Another idea is to plan the colors a little more so that the colors group together a little more and fade from more purple shades to more blue shades. I think that if I can manage to spin a decent worsted weight yarn, I'd really like to use this spin for a Tucked Away cardigan (I already impulse-bought the pattern when it was on sale for its release). If you have any thoughts on this, I'd love to hear them!
Posted by Sarah at 4:08 PM