I've become something of a finishing machine since my last "real" post, and I've actually finished three projects in the last week (one of which was also cast on since then). First, there was the baby blanket: 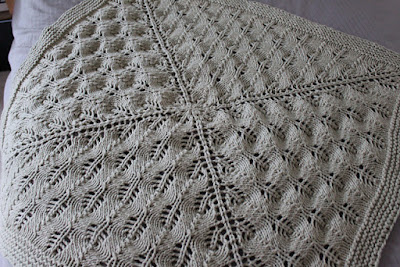 This was knit as a baby gift for my former college roommate and maid of honor, who is expecting her first child later this spring. I was invited to attend her baby shower next weekend, but thanks to where I live, I couldn't find any way to get there that wouldn't take the better part of the day and either require a flight and several trains or 7-8 hours in the car. That seemed a bit ridiculous for an event that's only a couple of hours long, so I sent my regrets to the hosts and sent the finished blanket to one of them so my friend could open it at the shower. 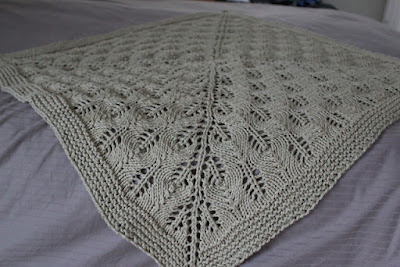 Although I could have easily charted this myself, I happened to have copies of the charts from the shawl on hand, so I just referred to those while knitting. For everything else, though, I made it up as I went along. I used Emily Ocker's circular cast on to start and worked outward. When it looked like I was getting close to finishing up the third skein of yarn, I started the border, which is all garter stitch save for the diagonal lines that fall between the increases. I ended up doing five garter ridges total for the border; I could have done more, but I was pretty much out of time and thought it looked good. I blocked it overnight using blocking wires to open up the lace and pulled out the wires and pins when it was just a little damp so it could fluff up a bit. I'm quite happy with how it turned out, though I think wool would probably be better suited to keeping the lace crisp. Still, I'm happy to have purged some deep-stash yarn and I know that my friend will approve of the fiber content.

There was much sock knitting over the weekend, between going to get our taxes done and sitting through a security training and meeting, so I now have another finished pair for my sock drawers! 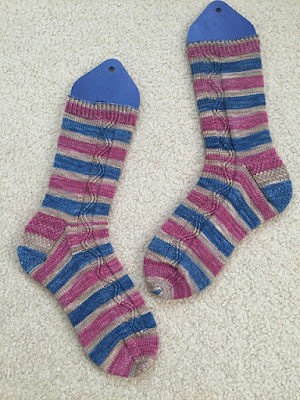 This pattern has long been one I wanted to knit, and the Lots of Socks knitalong was the perfect excuse to do it. The yarn was purchased at Needles Up Maryland last year, and I'd actually had it sitting out for a couple of months just waiting to be wound into a cake and cast on.

My main modification was to adjust the stitch count because I worked at a tighter gauge than specified in the pattern (9 stitches per inch rather than 8). That gauge change put me between sizes in the pattern, so I decided to go with my usual stitch count and make adjustments as necessary. I really only had to pay attention to the placement of the traveling twisted stitch panel; once I did the set-up round, I was good to go. I did decided to go off book for the heel and do an Eye of Partridge heel rather than the traditional slipped-stitch heel, for no other reason than I haven't done one in a while and felt like doing something a little different.

The pattern is very well written, and I had the stitch pattern memorized after doing one repeat of it. It's very intuitive. That made for a good multitasking project. I have a feeling there will be more of these socks in my future.

The final FO for the week is a project you haven't seen because it was cast on Monday night and finished this morning (and when I say finished, I mean just the bind off was finished -- I just couldn't stay up any later last night to get it done then). 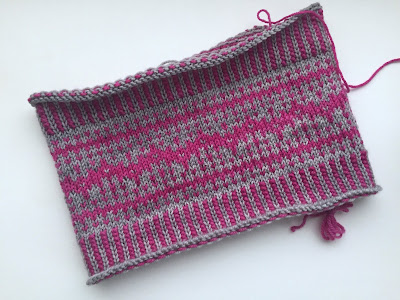 This is obviously fresh off the needles and hasn't had its ends woven in or been blocked yet. This is a new cowl design that's been on the to-do list for a long time -- the yarn I used was purchased back in August 2017 when we were on vacation in Cape Cod, Mass. I still have to measure the leftovers, but it looks like I might have enough to do a second one if I reverse the colors. This project reminded me just how much I love stranded colorwork and how fast it goes because it's so addictive. I've been playing with this motif for a while and I'm happy with how it finally ended up; I think I might have to do a hat with this pattern as well.

I cast on a new design project this morning, and I've been working on my Floozy cardigan as well. I am looking forward to knitting a lot this weekend, as I'm taking tomorrow off (Rainbow has no school due to parent-teacher conferences) and Saturday is my birthday. The weather is finally supposed to warm up in the next couple of days, but until then, I want all wool all the time!
Posted by Sarah at 10:51 AM