I Thought It Was a Short Week

Usually taking a Monday off makes the week feel noticeably shorter, but that has not been the case this week. It's my busiest time of year at work to begin with, and missing Monday put me back a day, so I've been insanely busy during the day. I'm still taking my lunch break to knit (if only to keep my sanity), and my socks have grown. I did a few sets of increases on the first sock and then put it aside to start the second -- I'm taking notes on when and where I'm doing increases, but it seems to me that the best chance of getting two socks that match is to work on them concurrently. 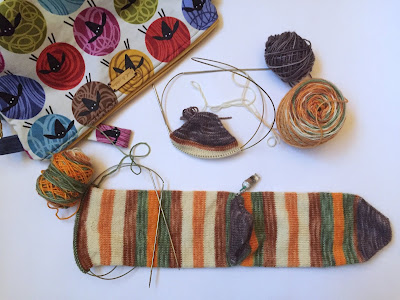 My Floozy doesn't look too much different, though I did get about half the body ribbing done on Tuesday evening while the Mister and I watched Bohemian Rhapsody. I'm hoping to be able to finish it tonight.

Because there's not much knitting to discuss, I thought I'd catch up on what I've been reading since I last posted about it.
I'm still reading Becoming (I have less than 100 pages to go, I think), but it keeps getting put on hold for library books. I also started reading Beneath a Scarlet Sky while we were away over the weekend (I didn't want to take a hardback book with me, or else I would have taken Becoming to finish). It's not bad, but it's long -- more than 500 pages -- so it's taking me longer than I would have thought. I'm also expecting my next library hold to come up at any time -- I've been number 1 on the list for almost a week!

This weekend I'm looking forward to catching up on sleep, getting outside, and doing a lot of crafting and reading. We do have some dinner plans Friday night and Saturday night, but otherwise our time is ours to do what we like. I can't remember the last time that happened, so I'm going to take full advantage of it!
Posted by Sarah at 8:40 AM