I am, quite simply, having a blast with my combo spin, and I am kicking myself for not doing this a lot sooner. I'm not sure if it's the colors or the thicker singles, but this spinning has been so addictive that I've already gotten my first bobbin done and started the second. 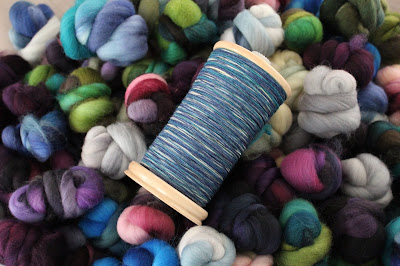 I'll admit that I probably could have planned out the process a bit better for this: I pretty much just stopped spinning the singles when this bobbin was more or less full. Only then did it occur to me that I probably should have counted the little nests as I was spinning them so that I could use approximately the same number on each bobbin. I figured out after the fact that I used 28 nests on this first bobbin, leaving me with 100, so each bobbin going forward will have 20. That will mean some splicing in of singles when it's time to ply, but frankly I'd assumed that would happen anyway. Given that the colors of the singles change frequently, it's not something that I expect even I will notice once all is said and done.

Other than counting going forward, the only micromanaging I'm doing (if you can even call it that) is ensuring that each new nest of fiber I pull isn't the same colorway as the one that I just finished spinning. I'm really trying to mix up the colorways as much as possible and to have them as evenly distributed through the whole lot of yarn as I can, and doing it semi-randomly like this seemed to be the best way to do it. Time will tell if I'm successful; I'm counting on the finished lot of yarn being pretty crazy and mixed up, I hope in a good way.
Posted by Sarah at 3:26 PM