Reading Mary's post from yesterday made me realize that perhaps in casting on new projects, I have been avoiding (or "procrastiknitting") a long-standing WIP, my Floozy cardigan. I have been working on it again, on and off, so to hold myself accountable, I thought I'd take some photos of its current status so you can see where I am. 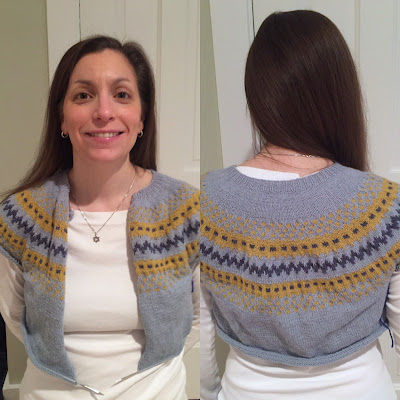 Apologies for the poor quality of these photos --  there's only so much you can do when the sun isn't fully up yet and you have a wiggly 9-year-old taking your picture! In any case, you can see that I've gotten some of the body done, I believe about 6 inches below the underarm. If I'm remembering the pattern correctly, I need to get to 14 inches before I start the ribbing at the bottom, so there's still quite a bit of knitting left to do on the body. But the fit looks good, bearing in mind that it's a bit hard to get a truly accurate sense of it with it still on the needles. I'll continue to plug away at this.

Meanwhile, I have cast on another new project. While I was off with Rainbow on Friday, I wound the yarn from the first shipment of the Fibernymph Dye Works Tea for Two club, which had been sitting around for at least a couple of months waiting for me to get to it. I knew that the next shipment was on its way (and, in fact, was delivered later in the day), and I didn't want to get too behind. The skein came with a mini contrast skein, so I'm using that for heels and toes and knitting toe up to maximize how much of the yarn I use (I split the main skein in half by weight prior to casting on). At the moment, I'm just a couple of rounds away from being ready to start the heel. 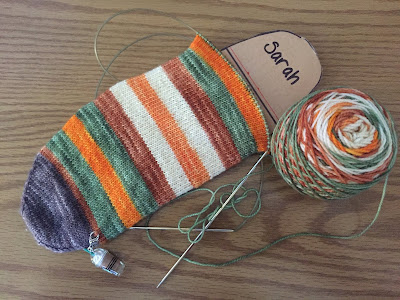 This colorway is called Zest Wishes, after the name of the tea that came with the yarn (and which I've already enjoyed). The colors represent the flavors of the tea -- citrus and cinnamon among them. They aren't colors I'd normally choose, but I certainly don't have anything like this in my sock drawers, and sometimes it's good to push yourself outside your comfort zone. After all, a girl can only have so many blue socks.

Finally, I would be remiss in not mentioning the box of loveliness that was waiting for me when I got home last night. After spending time putting together a FibreShare package for someone else, it was my turn to get spoiled! 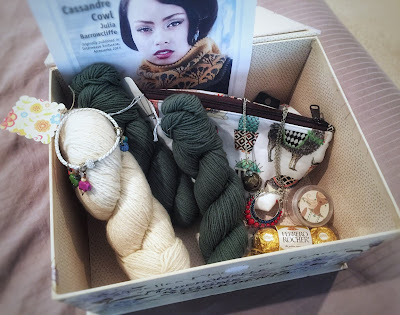 It's a bit hard to see everything, but there was a lot of good stuff packed into this box (a box, by the way, that is one of those nice reusable ones you can get at craft stores). The green yarn is Quince and Co. Finch, and I believe the cream-colored skein is handspun (it's labeled Georgian wool, silk, and nylon). I think these yarns together would make some great colorwork mittens! There's also an adorable project bag with llamas on it, some fun jewelry, a little container of stitch markers, a cowl pattern, and a package of Ferrero Rocher chocolates (which I pretty much inhaled last night). This package arrived precisely at the right time; the Monday after we turn the clocks ahead is always rough, and getting treats in the mail really lifted my spirits.
Posted by Sarah at 9:16 AM