A View from the Weekend

Why is it that the weekends always fly by? This past one was no exception, likely because we had several things planned and not a ton of downtime.

On Saturday, as a special treat, I took Rainbow and my mother to see the Pittsburgh Ballet Theatre perform Sleeping Beauty. The story was always my favorite Disney movie as a kid, and I'd never seen the ballet version, so it was something special for all of us. I knew I needed a new simple project to take with me (I don't know about you, but I can't sit still for two to three hours), so last Thursday I cast on for a new slouchy hat for me. It'll be similar to a Sockhead Hat, but I'm not really following the pattern at all -- just using the style as an inspiration. I did brioche for the brim for a change from the usual ribbing. Here's what it looks like as of this morning (my apologies for the dim lighting -- it's been a gloomy few days here): 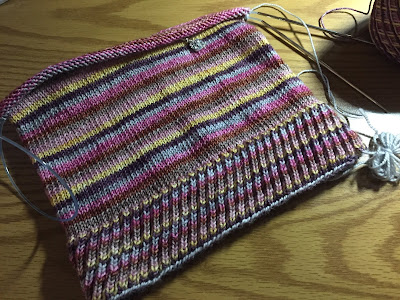 My main knitting goal for the weekend was to finish the shawl sample I showed you last week. The applied reverse stockinette I-cord edging took me parts of two days, but I did finish, and last night while Rainbow was in the shower, I blocked it. 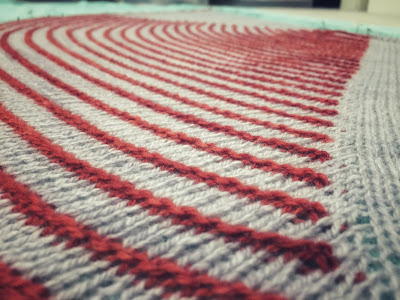 Fresh off the needles, it was a bit small and curled up, as you might imagine, but blocking worked wonders as it so often does. I didn't have a chance to check on it this morning, but I'm hopeful it'll be dry by the time I get home tonight and I can do some final measurements. I ended up playing a bit of yarn chicken with the gray and finished with just a tiny ball of yarn remaining. I've still got about two-thirds of the red leftover, and it's so soft and squishy (Cormo lambswool, hello!) that I might use it for a pair of mitts or something for me.

Now that the shawl is off the needles, my evening knitting is once again Rainbow's Little Boxy. It's going to be a long haul of knitting for sure, but at least it's mindless enough that I can read or watch something involving on the TV while I knit. I'm packing up my office this week in preparation to move to a different space on Friday, so it will likely be the perfect thing after some long days.
Posted by Sarah at 10:10 AM