I'm back! Chances are you didn't miss me at all thanks to the wonder that is scheduling a blog post ahead of time. But I've had quite a bit of catching up to do on e-mail and blog reading after being away and largely offline for about four days, not to mention that I was desperate for a long hot shower and a good night's sleep in my own bed.

All in all, it was a fun but busy weekend. I left at about 6:30 Friday morning, making a quick stop at Bruegger's for a bagel and coffee for the road, and was at the farm by about 7:30. We got on the road shortly before 8. This was my first trip to MDSW with Amy and Scooter Pie after doing the last two Rhinebeck trips with them, and on this trip we had two new companions: 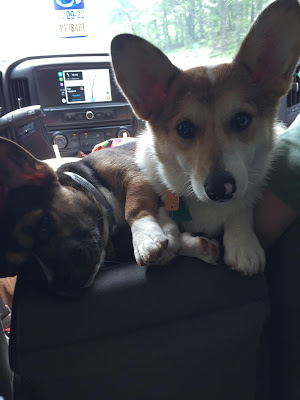 This is not the best photo of them, but with puppies, it's hard to get them to sit still long enough for a photo. These are Amy's newest puppies, Bo (short for Boudin) and Whiskey (full name: Whiskey Tango Foxtrot). Amy likes to say that Bo is her emotional support animal and Whiskey is Bo's emotional support animal. While Whiskey is full Pembroke Corgi, Bo's Corgi mother apparently had a liaison with a French Bulldog. They're both pretty darned adorable, and they were my sleeping buddies in the camper (their crate was right next to my bed, so I woke up each day to the two of them staring at me). They didn't come with us to the festival, but it was fun to see them at the end of each day (as you can imagine, after a day of sitting in their crate while we were gone, they had a lot of energy to burn off when we let them out).

The festival itself was a lot of fun and very busy. Saturday ended up being just about perfect, weather-wise. It was overcast and not too warm most of the day, with a nice breeze, and the sun popped out briefly a number of times. Sunday was the exact opposite: It rained all day long. We were in the Lower Coral in a tent, and frankly the entire area was a giant mud puddle. I was thankful that I'd had the foresight to bring my rain boots, because I really needed them and would have destroyed my sneakers had I worn them. I was also thankful that Scooter Pie had laid a temporary plywood floor in the booth (really done for the ease of wheeling out their display cases, but it helped with the mud, too!).

The highlight of the festival for me was this: 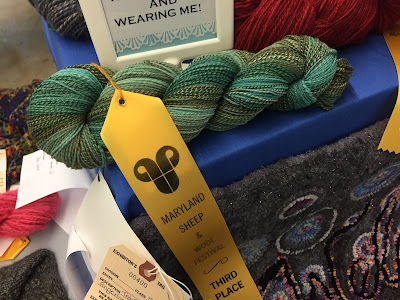 For the first time this year I was able to enter one of my handspun skeins into the skein and garment competition in person (you may recall that last year I entered two skeins and had to mail them in, and someone switched the tags on them, leading to poor scores). I knew this was one of my better skeins and hoped it would do well, and I'm absolutely delighted to have received a third-place ribbon!

Because the booth was so busy, I didn't get a ton of time to go out and shop -- and that was just fine, considering my strict yarn and fiber diet -- but I did sneak out to pick up a couple of little gifts for Rainbow, who was a little weepy when I had to leave on Friday morning. 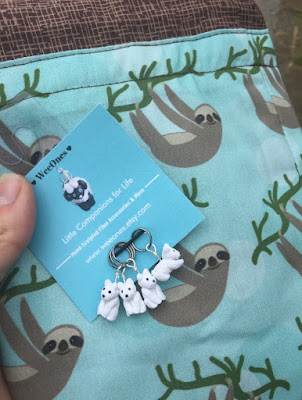 I specifically wanted to stop by the WeeOnes booth to see if she had any Westie stitch markers, and I was in luck! I hadn't planned on also picking up a project bag, but when I saw this one, I couldn't resist buying it for my sloth-obsessed daughter.

Amy and I took a stroll through the Main Exhibition Hall on Sunday morning, when business was slow, and I decided to treat myself with a new tool (it's not yarn and fiber, so it's okay!). 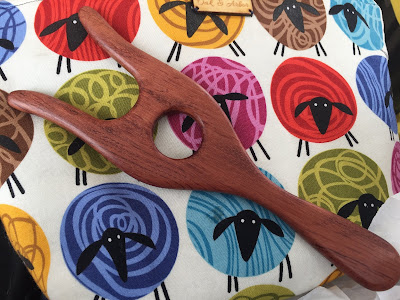 This is a lucet from Stephen Willette in beautiful Bubinga wood. I've never used one before, but he gave me a quick lesson in the booth and I was sent home with an instruction booklet, so I'm all set to give it a try. It's actually much easier than I would have thought, and it will be another good way to use up some stash yarn, particularly some handspun that is perhaps too scratchy to knit with but would be good for a rug or a hot pad.

Though I was mighty tempted by a lot of beautiful yarn and fiber at the festival, I didn't buy any -- but that's not to say that I came home empty handed. 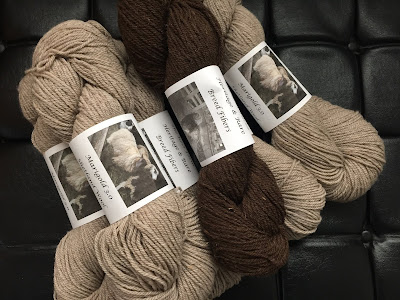 This lovely pile is my favorite yarn from the farm, Shetland 3-ply sport, which Amy generously gave me for a new sweater design that I have planned for later this year (if all goes according to plan, it will make its debut at Rhinebeck). It's been years since my first sweater design, and I think I am now ready to tackle a stranded colorwork yoke pullover. I'll be using Marigold, the lighter color, as the main color and Lindy, that gorgeous chocolate brown, for the contrast in the yoke. I still have some reading and swatching and number crunching to do, but my hope is to have this in the works by the summer.

Everything is now back to the normal schedule for me, and this week I'm working on finishing up a couple of projects at home and packing up my office for a move next week at work. Though it wasn't a relaxing weekend away in any sense, it was a lot of fun and a great opportunity to see some friends from far away. Now let the countdown to Rhinebeck begin!
Posted by Sarah at 10:12 AM