Not nearly as much knitting got done while I was away as I would have liked, but I did make some progress and added to it during my lunch breaks this week. After about three failed attempts, I finally managed to figure out the crown decreases for Rainbow's brioche hat, and I finished it up last night right after I put her to bed. 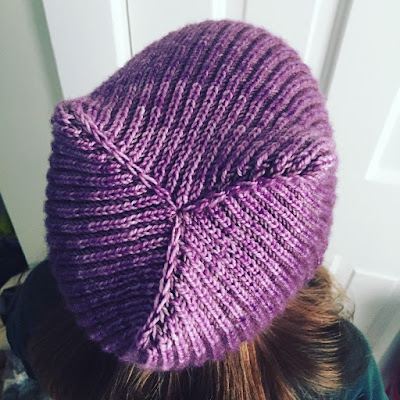 As brioche projects go, this one was pretty simple. For most of the hat, I simply did the basic two-color stitch pattern, switching to a new mini skein for each strand when the previous one ran out (in the interest of science, I use a Russian join for one transition and a braided join for the other). The complicated part came when I was ready to do the crown. The problem with brioche is that you can only do decreases that reduce your stitch count by an even number of stitches (2, 4, etc.) in order to maintain the pattern. This makes it difficult to get a smooth dome-like shape for the crown. First I tried to do either k3tog or sssk decreases in four evenly spaced points, but it wasn't possible to do with my stitch count. So I settled for what you see here: three lines of 5-into-1 decreases. It made for a much shallower crown, but it's a cool effect, and Rainbow is quite pleased with it, as you can see: 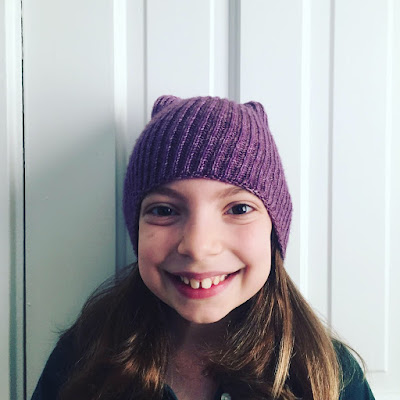 She thinks it looks like kitty ears (with a bonus point in back). I suggested she think of it as a "tricera-kitty" hat, but she told me I was being ridiculous; similarly, my suggestion to put little pompoms on the points was quickly rejected. I will block it this weekend and try to stretch out a bit more length if I can, but I think the fact that she wore it to school today, when it was already in the upper 60s F when we left the house, is indication enough that she's completely happy with it.

I did get a little bit done on her Little Boxy on the drive down to Maryland, so I've now got about two to three inches of body on the needles. I haven't touched it since, but I expect it will soon be in regular rotation. 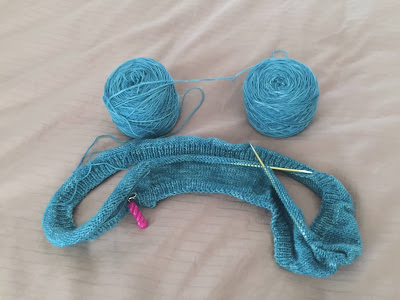 For the moment, my main focus is going to be finishing up this design sample, because I'd like to release it next month and need to allow time to write up the pattern and have it tech edited. 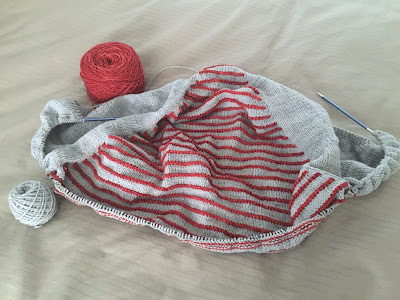 I know it's hard to see all bunched up on the needle, and I think you can tell why I'm so eager to finish -- I really want to block it and see how it looks all spread out and opened up! My plan is to knit until I'm about out of the gray, and that ball is quickly getting smaller. I expect I'll be able to get in one more stripe of the red before that happens. I'm still debating whether to add a garter border in the red or not; either way, there will be an applied I-cord edging in the red to finish it off. I might have to run a lifeline through the stitches and take it off the needles to get a sense of the true size before I decide (though opinions are certainly welcome).

The weekend is shaping up to be a good mix of activity and relaxation. On Saturday afternoon, I'm taking my mother and Rainbow to see the ballet perform Sleeping Beauty, and then we've got a Mother's Day brunch planned with the family. There are the usual errands and chores, but I'm really looking forward to sleeping in and staying home after last weekend's exhausting adventures. Whatever your weekend brings you, I hope you enjoy it!
Posted by Sarah at 9:46 AM