I'm closing in two senses of the word today. First, I can mark the closing of one project, my new shawl design, which has now been blocked and had its ends trimmed, marking it officially done. 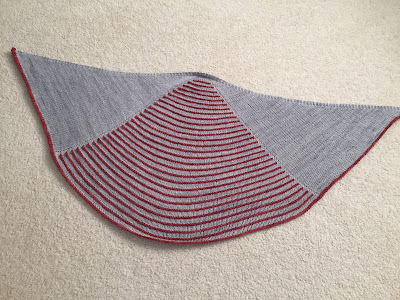 I know it looks a bit wonky here, but that's mainly due to my haste in snapping the photo this morning. I might still hit it with a shot of steam here and there before we shoot the pattern photos, but this is pretty close to the final product. I'm very happy with how it turned out and with how it blocked. Freshly off the needles, it was smaller than I expected, but wool does stretch very nicely. This still isn't a huge shawl, but post-blocking it's big enough to sit comfortably on the shoulders. Finishing up the pattern and getting it off to my tech editor is on my to-do list for the weekend.

The other closing that's happening is that I've started the crown decreases on my slouchy hat. 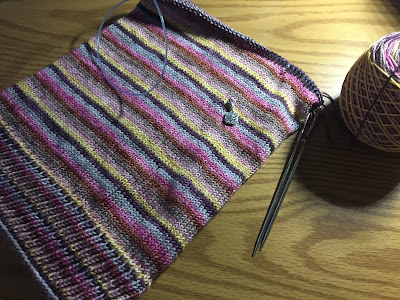 I worked in stockinette until the hat measured 10 in., which I think should give me sufficient slouch. To be honest, I'm a little sad that I'm almost done because this has been such an enjoyable knit. The colors are really lovely, and it's been something that's been easy to pick up and put down -- unlike Rainbow's Little Boxy, which, although also all stockinette in the round, involves alternating skeins and is thus not nearly as portable.

I'll soon be casting on another travel/work project, as I anticipate finishing this hat later today, but it remains to be seen how much will get done before the weekend. Tomorrow is a big day at work, as quite a few of us will moving offices. This is all part of a big reorganization plan to group people who work on teams more logically in physical locations; at the moment, people are kind of all over the place, as they've been put in offices that are empty as they've started working. It's not a big office space in general, but having been in my space for about a decade, it's meant quite a lot of clearing out and packing up. I'm glad that there's very little on the calendar this weekend so that I can finally get a relaxing couple of days in a row. I'm also keeping my fingers crossed that the weather cooperates and I'll have time to plant the flowers I picked up last weekend!
Posted by Sarah at 9:49 AM