This past Friday evenings I sat at my wheel, as I normally do on Fridays. Having finished my singles earlier in the week, I was ready to ply and see how the finished yarn would look. I managed to get through the entire bobbin before bedtime, so I while I was excited to be done, I knew that it likely meant low yardage. I wound up the skein Saturday morning and gave it its bath, and by this morning it was dry.


I have mixed feelings about this skein. I'm very pleased with how it turned out, but at only about 242 yards, it's much less yardage than I was hoping for from a fingering-weight skein. The fiber was Corriedale from Southern Cross Fibre in the colorway Spring. While I can see the colors of crocus blooms in the yarn, it also looks a little bit like a mashup of Halloween and Mardi Gras colors. 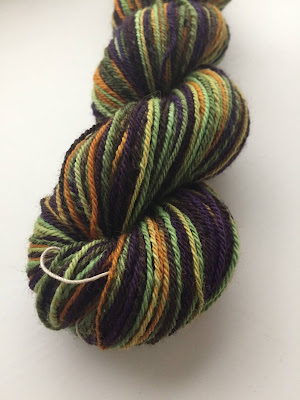 I have some undyed dark brown Corriedale in my stash and think I will spin up a smaller contrast skein to go with it.

On my wheel now is some more Southern Cross, this time Polwarth in a gorgeous colorway called Millefiori: 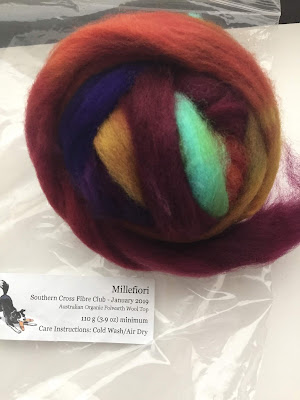 I've split the fiber in half lengthwise and am once again spinning end to end, and I'll chain ply when I'm done with the singles. And I already know what's going on the wheel after this spin is done: 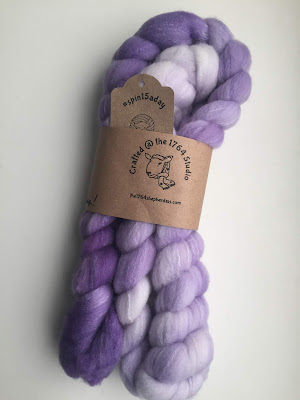 I may not be buying any new fiber, but surely winning some in a giveaway doesn't count toward the prohibition? Sherrill posted this fiber on Instagram, and as I never win contests, I figured there was no harm in entering. So you can imagine my surprise when I did win! This is a Targhee/bamboo/silk braid in a colorway called Lilac Girls after the book of the same name (a book I read while we were in Florida most recently). I'll either split the braid in half lengthwise and spin a two ply, attempting to match up the color as much as possible, or spin it fine end to end and chain ply.
Posted by Sarah at 6:36 PM