Spinning has been satisfying my color cravings this weekend. For one thing, my current project seems to have every shade in the rainbow. 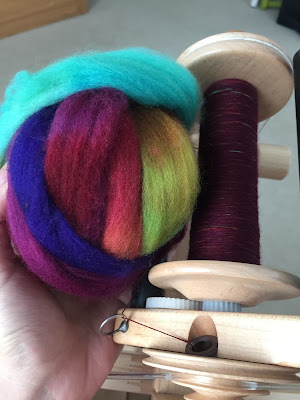 I'm pretty sure I showed the fiber last weekend, but I don't think I'd gotten much of it spun at that point. I'm now a little more than halfway done with the singles. This is organic Australian Polwarth, my absolute favorite wool to spin, and I know that it will poof up when I wash it, so for now I'm spinning very fine singles (somewhere in the neighborhood of 40 wpi) with plans to chain-ply when all the fiber is spun. This fiber was the January shipment from the Southern Cross Fibre club, on which I have quite a backlog, so I'm extra happy to be spinning it.

It's also a good thing because April's shipment has shown up this weekend, and it's a stunner. 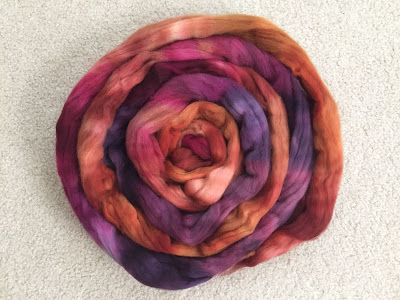 The colorway is called Posy, and it's on lovely Bond wool, another one of my favorites. Someone in the SCF Ravelry group said that it reminded her of a sunset, so she split up her fiber to make a gradient. And I'm going to shamelessly copy her. The gradient will go from that beautiful rusty orange to the magenta to the purples. I think it's going to be stunning.

I'd be tempted to get it on the wheel next were it not for a little swap thing I'm participating in through the 90% Knitting podcast. The idea is to find 4 oz. of fiber in your stash, split it in half, and send half of it to another spinner, who would do the name in their stash. The two swap partners then have 2 oz. each of two colorways and can spin them up however they like. All the participants will then be sharing photos of how they spin the yarn. I received fiber from my partner on Friday, and it's quite gorgeous: 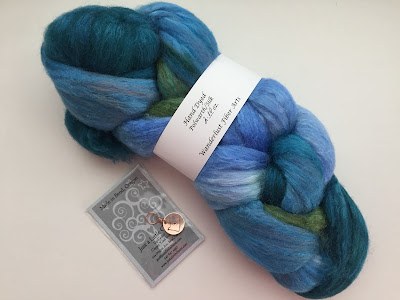 It's Polwarth/silk, dyed in colors that reminded my partner of where she's from in Oregon. She also included a couple of extra treats: a spinner's journal (not shown) and this adorable stitch marker with the state of Oregon on it. It's made of reclaimed copper, or so the back of the packaging says: 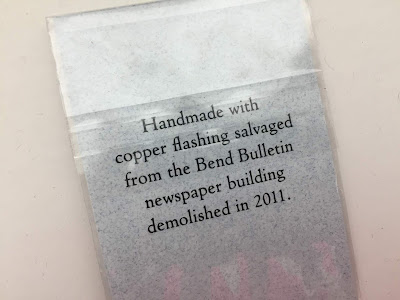 Pretty cool, huh? I sent her package this weekend, and just in case she happens to stop by, I won't post a photo, but I will say that the colorways we both chose should go very well together. I'm fairly certain that even though I wanted to get to the purple prize fiber next, this project is actually going to jump ahead of it because I have a fun idea for how I want to spin the two colorways.
Posted by Sarah at 3:51 PM