A Different Kind of Stitching

It's Wednesday, not one of my usual days for blogging, but I felt like putting up a post today, so why not? I'm joining Kat and friends for Unraveled Wednesday.

Usually the stitching I talk about here is in the form of knitting, though occasionally there's some crochet or embroidery. But the times being what they are, I decided to try some stitching of another variety over this past weekend and pulled out my very old sewing machine (not quite antique, but I've had it since I was in high school, I think, so it's certainly not from this century). I wanted to try my hand at making face masks, for obvious reasons, but I'd also been meaning to try sewing a project bag for about two years.

For the face mask, I followed this pattern/tutorial, which I'd thought looked pretty straightforward for a non-sewist like me but which I've since been informed is actually not very easy. I guess that's why the first attempt looks so amateurish: 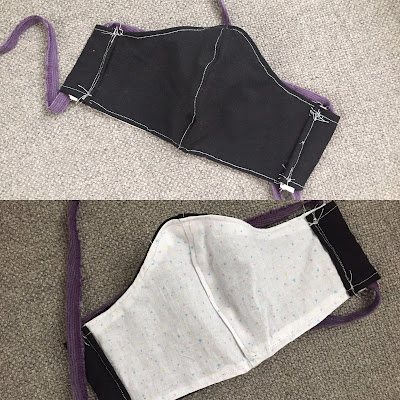 The first one was made in Rainbow's size and used some quilting cotton (the white with polka dots) and some old pants of mine that no longer fit. The white fabric was meant to be the outside originally, but the black ended up being larger and so we flipped it the other way. Because I was still figuring things out, there wasn't enough fabric at the sides to make channels for the ties, so I cut out extra pieces of fabric and added them after the fact. The tie is actually a strip of an old T-shirt that had holes in it. The end result of this sewing, which took longer than I'd like to admit, is serviceable but not very attractive.

Last night I was ready for a do-over. I'd come to the conclusion that part of the difficulty in the first attempt was my fabric choice; both fabrics were on the floppy side, and the black was especially difficult to work with because I couldn't see any lines I'd drawn on it to cut out the pieces. So for attempt number two, I pulled out an old ripped bed sheet and a pillowcase from a sheet set from my teen years (one I never liked, mind you). The sheet was plain white, so I told Rainbow to have fun with some fabric markers to make it a bit more cheerful. 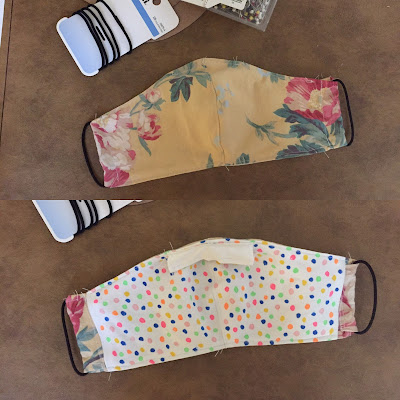 Can you see the improvement? I knew what I was doing this time and also how to adapt to the issues I had with the first mask. Instead of straps, I used hair elastics for this mask (though I can always do straps later). I also added a little pouch to the inside so I can add a nose wire if I want, and the sides are still open, giving me the option of sliding in some sort of filter. I'm pretty proud of myself for doing this, even though I know there's still plenty of room for improvement. I plan to make some more for the immediate family, and though Rainbow can't do that much to help with the actual sewing, she can still help by prettying up the fabric, which she seemed to enjoy.

After the first mask, we also worked on a project bag using this tutorial. (And when I say "we," what I really mean is that Rainbow told me which fabric she wanted where and I did the measuring, cutting, and sewing.) This project was much more successful. 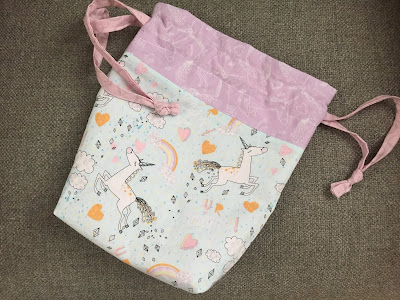 This bag uses three different fabrics. The purple at the top of the exterior has the same unicorn and rainbows design as the bottom, just in white outlines, and the interior is pink with gray hearts (it's the same as the fabric used for the scraps). Though the fabric I used is probably not the highest quality or the best for this sort of thing, it worked well enough, and I am really happy with this bag -- especially considering that I measured and cut it all in a rather haphazard way (with a ruler, pencil, and scissors). I'm particularly proud of the drawstrings, which were probably the most challenging piece. I can definitely see myself making more of these in the future, though I'll probably wait until I can get my hands on some better fabrics. Rainbow has naturally claimed the first one and is using it for a gift she is knitting for one of her teachers.

These sewing successes (because while they're amateurish and sloppy to those of you who know what you're doing, they're still successes for me) have really grown my interest in learning to sew properly. I've been interested in making clothing for a while, but I really want to do it right, by taking classes and learning about fabric and techniques. I know there is a sewing studio not far from my house, so I'm definitely going to look into some classes once we're able to do that kind of thing again. If you are a more experienced sewer and have any recommendations for me in the mean time, let me know!
Posted by Sarah at 9:10 AM