Anything But a Nightmare

My pile of pandemic-spun skeins has grown bigger in the last few days. After spending a few days spinning up all the singles, on Friday morning I plied them all. I let the yarn rest on the bobbin overnight and then skeined and washed it yesterday. I wish the lighting were better to show you how stunning this yarn is -- these photos just don't do it justice (thank you, rain that will be here all day!). 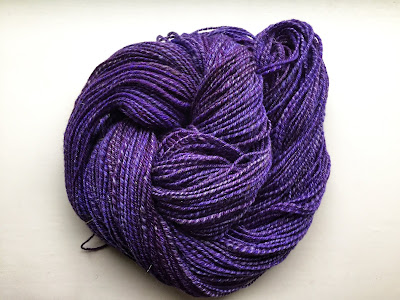 This yarn was spun from a set of batts that I bought at SSK when I attended back in July 2017. One of the classes I took at the retreat was on spinning batts with the extremely talented (and delightful) Jillian Moreno, so it seemed appropriate to pick up some batts at the marketplace from Liz at Hobbledehoy, who is not only a talented fiber artist but also an extremely nice human being who I became friends with at the retreat. She called this set of batts "Nightmare batts" for some reason known only to her. They contained a blend of organic Polwarth wool, bamboo, yak, silk, and a touch of sparkle. Does anything in that list sound like a nightmare to you? Me, either! 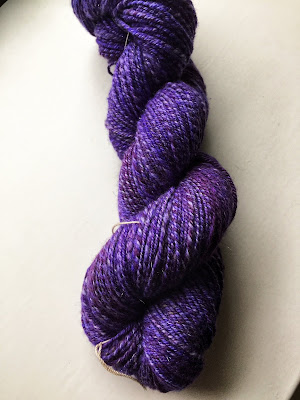 I love how the fiber prep combined with the method of spinning results in a more rustic yarn that's a little more inconsistent -- I think it adds great character to the yarn. I have about 265 yards, so enough for a smallish project, and I'm fairly certain that a purple-loving 10-year-old is going to claim it for something for her.

I've already lined up the next spinning project, again dug from stash from a couple of years ago. I'm not 100% certain what it is, though I know it was a HipStrings club shipment and I think it's the August 2018 shipment that contained a blend of BFL and Shetland in natural colors. It came in the form of four bundles of fiber, and as you can see, I've split each shade into three portions. 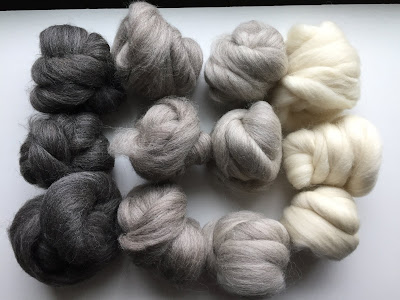 My plan is to spin another traditional three ply and do it as a natural gradient, so each ply will use one bundle of each of the four shades. My splitting and spinning are just inconsistent enough that the transition between the shades is likely to be in a slightly different spot in each strand, which should result in more subtle transitions. I haven't weighed the fiber yet, but I think I have 2 oz. of each shade, so I should end up with a pretty sizeable skein when I'm done (I'll have to break out the long-ignored miniSpinner to ply it all!). I think it'll make a fantastic and cozy shawl -- but first things first. I'm planning to start on the spinning later today, and though I've been on somewhat of a tear through my fiber stash, I think this might take a little longer to get through than recent skeins.
Posted by Sarah at 10:35 AM