Stress and generalized anxiety seem to be the new normal state of existence for me. I'm a worrier in general, especially when the health of my loved ones is an issue, so you can imagine that the current pandemic is not great for my mental health. Luckily, I have years of therapy behind me, so I have strategies for dealing with this kind of stress, and I've been taking medication that helps me to feel like I'm on more of an even keel. But these times are extraordinary, so I've been finding I need a little something extra now and then to work out the nervous energy.

Running has been helping a lot. I started out the month with the goal of running the equivalent of a marathon, and as of yesterday, I've completed 23.8 miles. I've actually gotten to the point where I'm looking forward to and enjoying my runs! Physically, they're getting a bit easier: I don't get winded as fast, I feel less sore afterwards, and I've been able to run for longer. Yesterday I even ran 3.6 miles without stopping and recorded my fastest ever 5K time (27:27, if you're interested). Now, I don't think I'll be running a marathon anytime soon, but it feels good to move, to be outside, and to feel physically exhausted at the end of the day rather than emotionally so.

In the past week, I also did what I kept referring to as "stress spinning." Basically that meant really fast spinning -- treadling probably a bit too fast than was good for the singles and noticeably thicker singles that what I usually produced. But it scratched an itch to create and to create something quickly, and frankly I'm not at all sorry I did it because I ended up with some beautiful yarn! 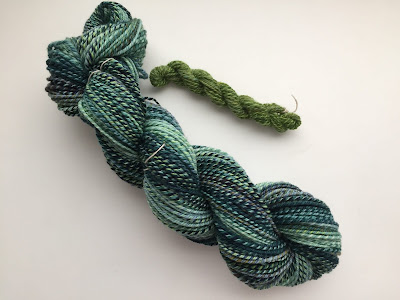 This is Southern Cross Fibre organic merino in the colorway The World Spins. I had split the fiber into thirds and spun each third onto its own bobbin. When the first bobbin ran out, I wound off the singles on the bobbin left with the most into an Andean plying bracelet (after the last disaster, I wasn't about to let it defeat me!) and continued on until the second bobbin ran out. There were still singles left in the plying bracelet, so I continued to ply until they were all gone. Then, when I wound off the yarn, I broke off that little bit of two ply and made it into its own tiny skein. 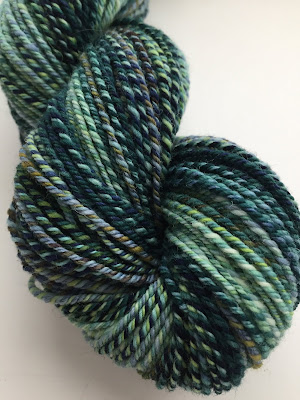 The main skein is roughly worsted weight, which is way outside my normal comfort zone. But it's certainly dense. David's club shipments are typically 110 g, a tad under 4 oz., and this skein is only 165 yards or so (compare that to a typical commercial worsted weight yarn, which is usually about 220-ish yards for the same weight). I was not at all surprised, given that this was spun worsted, which squeezes the air out of the fiber. And frankly I love how it looks so much, I'm only sorry I don't have more because I'd like to have the options that come from having more yardage. But I won't complain. 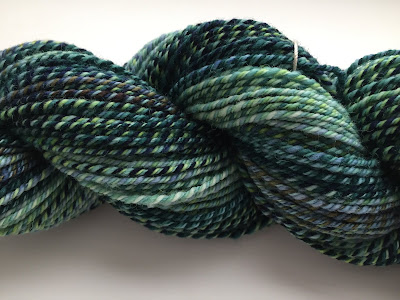 The fiber was predominantly blue and green, but here and there were spots of dark purple that turned a little brownish, and I love how you can see them in some of the plies if you look closely. It's this kind of thing that makes spinning handpainted fiber such a joy.

I had such fun with this spin that I think I might do it again with another recent Southern Cross Fibre club shipment that's been sitting next to my wheel! I don't know if I'll have as much time to spin during the day this week (the start of last week was fairly slow), but at the very least I can get in some time during meetings.

I hope you've had as good a weekend as possible, given the circumstances, and if you celebrate, I wish you a very happy Easter. Let's continue to channel our stress and anxiety into things that bring us joy!
Posted by Sarah at 6:10 PM