I know I've mentioned recently, perhaps more than once, that my knitting mojo has dropped since we started staying at home. I'm not sure why, as knitting has always brought me such comfort in the past (in fact, the only time I can remember not wanting to knit before was when my appendix decided it needed to come out). I've been doing a lot of crochet and spinning, but I missed my love of knitting -- I just didn't feel like me without my needles in my hands every day.

So when I realized I really needed to knit a baby gift, it was just the kick in the pants I needed. A dear friend of mine had a baby late last week, and as this friend is also a knitter, I could not let the occasion pass without making her something. Though I usually make larger projects for new babies so that they'll be able to be used longer, in the interest of time, I decided to go with newborn-sized items that could be used right away. If these look familiar, it's because I knit them as a set for another last fall. 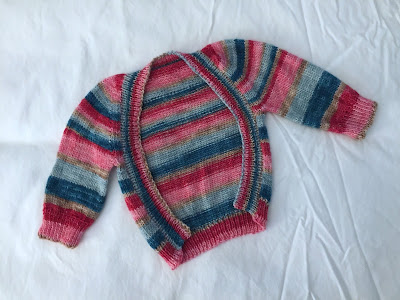 This is a very popular pattern, and with good reason, because it's adorable, quick to knit, and easy to execute. My only modification was done to make things a little easier for me. The pattern does not call for casting on any stitches under the arm when you split off the sleeve stitches, but I cast on two stitches under each arm because I've found that not doing so stresses that point a bit too much for my taste. So I added those two stitches under each arm and then then did two decreases to get rid of them on the next right-side row. Similarly, instead of picking up one stitch under each arm when I started the sleeves, I picked up five and then did two sets of decreases on following rounds. This helped to close up holes at the underarm a bit. And yes, I did wind off the yarn when I started the sleeves to get them to (more or less) match. I was about a round off, but I'm not sweating that too much.

Of course, I had to make the hat to go with the sweater. 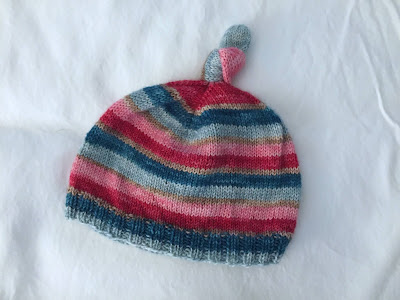 The last time I knit this pattern, I kept making stupid mistakes -- through no fault of the pattern; it was just me being overconfident I knew what I was doing and not actually reading the instruction. This time, I made sure to read and follow the instructions and had no issues (well, I did miss one decrease in the final decrease section, but that's because I was knitting while drowsy, and it wasn't a big deal). I've been known to refer to this pattern as the rude baby hat because when you finish knitting it, the long tube that forms the topknot looks a little like, well, um, genitalia. (Sorry. Once I saw it, I couldn't unsee it.) It's extremely cute when it's tied up, though, so try not to worry about that.

These items are now ready to be dropped off for my friend's sweet baby girl to use, and as we can't meet her in person, I'm thinking of them as a virtual hug for this little one.

I've been continuing to work on Rainbow's crochet blanket as part of the 100 Day Project for at least 15 minutes every day, and I'm getting close to finishing up the first skein of Felici. She is delighted with how it's working up, and I'm enchanted with how the self-striping is working up. 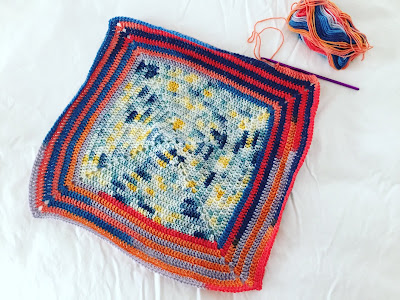 Now that the baby knits are off the needles, I have decided to hunker down and finish up my new design sample. I was really excited about this idea when I first got it, and I can only blame COVID-19 anxiety for diminishing that. 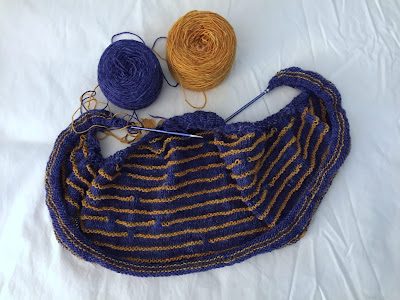 There's no excuse for it being on the needles as long as it has, so I am hereby committing to getting this done ASAP -- hold me to it!
Posted by Sarah at 8:45 AM